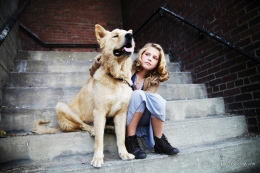 Todd Hancock studied theater at Youngstown State University 30 years ago. After two years of education, he packed up and made his way to Los Angeles to be an actor.

He eventually made his way back to Youngstown and opened Easy Street Productions in 1988 with fellow actor Maureen Collins.

On Friday, Hancock directed and starred in “Annie,” the inspiration for the naming of the actors’ production company.

“Annie is probably one of my favorite musicals,” Collins said.

Hancock said directing and acting have been his passions for a majority of his 50 years. He said he’s always proud to perform in a hometown that is full of talent.

“Annie” tells the tale of a young orphan who gets adopted by Oliver “Daddy” Warbucks, a billionaire businessman.

Hancock acted in the role of Daniel “Rooster” Hannigan and Collins as Miss Hannigan, the story’s antagonists. Hancock’s character pretends to be Annie’s real father in the hopes of gaining reward money from Daddy Warbucks.

Collins said the same, adding that her performance brings a comedic relief to the role.

“That’s the most fun part of the job,” she said.

She said the most challenging part was pretending to treat the orphans of the play poorly.

“I love little kids, and to act like I don’t is a bit of a challenge,” Collins said.

“It’s funny because the kids know I’m not like Miss Hannigan, and when I call them ‘little brat,’ they know I’m not mad at them.”

“We met in 1983 doing the show, and we’ve been like brother and sister ever since,” Collins said.

“Our motto is ‘Big Apple entertainment without the Big Apple price,’” Hancock said.

He said he wants to see the theater culture grow even more in Youngstown as he’s seen it grow over the years.

“Youngstown, for me, is where my family is. Anything I was doing anywhere else just doesn’t compare to performing at home,” Collins said. “I don’t believe we would have survived anywhere else.”