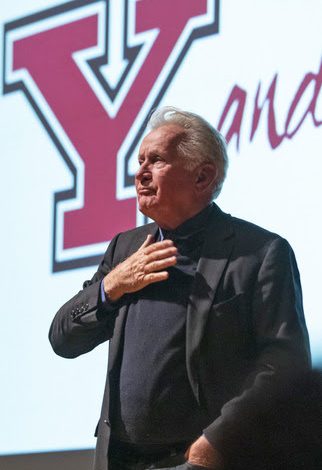 Martin Sheen, award-winning actor and social activist, gathered with students from Youngstown State University to educate them about his early life, family and inspiration on Oct. 16 at Stambaugh Auditorium.

Sheen, known for his roles in “The West Wing” and “Apocalypse Now,” traveled to Youngstown as part of YSU’s Skeggs Lecture series.

Sheen was raised in Dayton, Ohio, only a few hours from Youngstown.

“It’s so nice to be here near Dayton, my home, where it all began,” Sheen said. “I always am so proud to tell people I’m from Ohio.”

Although Sheen is commonly known for his career on the big screen, he spoke to the students about the increase in gun violence around the United States and immigration.

“Acting is what I do for a living, but activism is what keeps me alive,” he said. “We are so made as to try and find something worth fighting for, … something that can help us lift up this country and all its people where the hearts are without fear, and the head is held high.”

Sheen said he grew up in a diverse household, allowing him to pursue change in society and become an activist.

“If you grew up in a very large, poor immigrant family, chances are you were either Irish Catholic or Hispanic,” he said. “I was lucky enough to be both. … I had a real advantage when it came to social justice activism.”

From a young age, Sheen knew he found his purpose in life, which was to see himself on movie screens.

“I have no conscious memory, believe it or not, of ever not acting,” Sheen said. “I started going to the movies around age 5 or 6, where gradually it dawned on me that I was like those people up on the screen. It was an extraordinary revelation.”

Jackie LeViseur, director of the Office of Alumni and Events at YSU, is responsible for booking the speakers and encouraging the community to attend the Skeggs Lecture Series.

“We try to keep the lecturers and the subject matter at Skeggs diverse,” she said. “We do at least two per year with varying topics, and I always try to solicit suggestions from students and the community on what they want to hear.”

LeViseur said one moment that stood out to her during the lecture was Sheen’s request for the audience to sing a hymn with him.

“He had us all sing ‘Amazing Grace’ together, which was incredible,” LeViseur said. “That has never happened, and he really just wanted the audience to open their hearts. … And everyone did.”

LeViseur said students should attend the lectures because she is enlightened by each presenter.

“[Sheen] was really inspiring, very humble and his message was to believe in yourself and you can do it,” LeViseur said. “If your motives are true and honest and pure, you can achieve whatever you set out to.”

Sheen opened the floor with questions from four YSU theatre studies majors in the audience.

“In this field, we don’t really get to say what’s a success and what’s not. The world tells us whether we made it or not,” Wix said.

According to Wix, Sheen’s presentation was inspirational to him as a student pursuing a career in show business, specifically as a professional light designer.

“I took away from the entirety of the lecture a sense that you have to be proud of what you’re doing and it has to mean something to you,” Wix said. “[Sheen] said this a few times; ‘Whatever you’re doing you have to make it personal, because if it’s not then it’s impersonal; no one cares.’’’