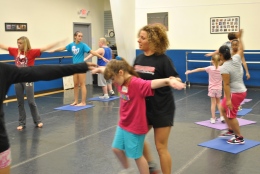 Malloree Miller helps one of her students, Becca, with a dance during her class for kids with special needs. Miller hopes that this trial run of classes is successful so she can continue to teach dance to special education students. Photo by Marissa McIntyre/The Jambar.

On Wednesday, Charlotte Campolito dropped off her grandson, David Campolito, at his second dance class.

Before walking into class, he had an outburst and wanted to go home. David Campolito, who is autistic, has trouble adjusting to new environments.

He calmed down at the sight of Malloree Miller, a Youngstown State University dance management major.

After graduating from high school, Miller began teaching at the Performing Arts Center in Canfield. Having started her college career as a special education major, she wanted to combine her two passions.

Now, she has begun to teach students with Down syndrome, autism, physical disabilities and attention deficit hyperactivity disorder, also known as ADHD.

“I have ADHD, so I know how to relate to these kids,” Miller said. Charlotte Campolito said it’s hard to find activities for her grandson to do, and it’s important to their family that David Campolito has the same experiences as other kids. She said finding this class was a blessing.

“It makes us feel good to know he can be with other children and associate with kids like him,” Charlotte Campolito said. “Anytime we find something like this, we like to try it out. Sometimes he’s accepting, and sometimes he isn’t. So, I’m glad he’s enjoying this.” Lisa Friend, owner of the Performing Arts Center, said she supported Miller right away.

“We thought it was a fabulous idea,” Friend said.

With this class being a trial run, she said the center didn’t do much advertising, but still got a good turnout of students.

“We have a good base of parents that work with special needs kids, so we thought it would be a good fit,” Friend said.

Miller said she was nervous during the moments leading up to the first special education dance class she taught on Oct. 17.

“It was stressful. I had to watch everybody and make sure they were all OK. If one of the kids were to get hurt, that wouldn’t be good,” Miller said.

To her delight, the kids and parents were excited to return for another dance lesson.

“One of the kids didn’t want to leave. She was hanging onto the wall, saying she wanted to keep going,” Miller said.

On Wednesday, Miller taught the second special education dance class and greeted the kids with enthusiasm while giving them encouragement throughout the class.

During the classes, Miller has each of the eight students pair up with a dancer from her regular classes. She doesn’t teach them routines, but teaches them basic dance moves and stretches.

Friend said pairing the kids with another dancer is another plus to the class.

“I love that it gives dancers the opportunity to volunteer and to get hands-on experience to what they may want to do someday,” Friend said. “This also gives the parents a little break. For 45 minutes, they can go get coffee andjust relax.”

Miller plays songs the kids would be familiar with during the class.

“They really like that song ‘Call me Maybe.’ It’s so fun to see what dance moves they’ll do when that song comes on,” Miller said.

The students range in age from 6 to 19 years old. Miller said she was worried about how the mix would play out at first, but was pleased with the turnout.

“They all got along; we had no problems. If anything, they comforted each other and fed off of each other,” Miller said. The Performing Arts Center is one of the only dance studios in the area to offer such a class.

“It made me feel proud to think that this would work out. I hope that it grows more,” Miller said.

So far, she has taught two classes and two more are scheduled. Miller hopes she can continue to teach the class regularly.

“This has challenged me as well. It has helped me explain things to my helpers and has given me the opportunity to step up my abilities,” Miller said.

Friend said the parents she has talked to hope the program continues.

“I wish they could come up with more for special needs kids,” Charlotte Campolito said.

Miller said she hopes to open her own dance studio and exhibit her teaching and dance skills after graduation.

“These kids have already taught me so much,” Miller said. “They’re so much smarter than people know.”