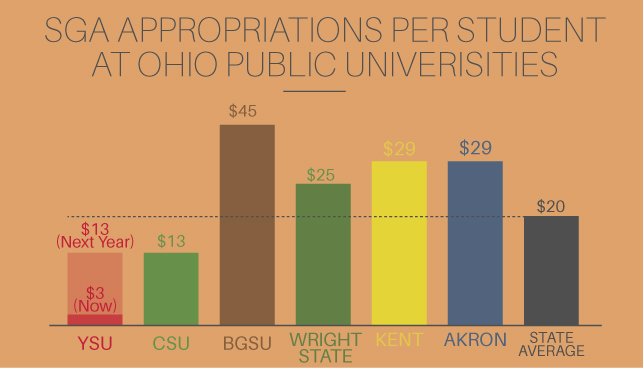 Student organizations will have access to significantly more funding next year when Student Government Association’s appropriations budget increases by $125,000.

The university currently guarantees SGA $32,383 for appropriations each year. This amounts to about $3 per student, significantly less than the $20 average among Ohio public universities.

The increase expands the appropriations budget to $157,383, which brings the dollars per student to about $13.

Ashley Orr, president of SGA, said her administration established growing the appropriations budget as a goal this year.

“We are just so thankful,” Orr said. “We expected to work on this project all year … [and] it turned out to be much easier than that.”

Neal McNally, vice president for Finance and Business Operations, said the administration thought SGA’s request was reasonable and in line with the university’s goals.

“The budget is really a reflection of the university’s priorities,” McNally said. “Students are a priority, and this is something that supports students directly.”

Orr said they wanted to compare their budget with those of their peers. She began talking to other presidents at an Ohio Student Government Association meeting to determine if the appropriations budget at Youngstown State University was in line with other Ohio public universities.

“The sad news is that it’s not,” Orr said. “We’re well below the average.”

When McNally was presented with the results of Orr’s survey, he conducted his own research — receiving information from every Ohio public university barring the University of Toledo and The Ohio State University — and arrived at the same finding.

“The information that I got back indicated quite clearly that YSU was an outlier in terms of having comparatively low SGA budget appropriations per student,” McNally said. “In fact, we were the lowest.”

Orr served as SGA’s vice president of finance last year, and under her watch they funded 131 student events — a dramatic increase from the previous year’s 88.

“We [did] a lot of good work,” Orr said. “But we could have done so much more if we had access to more funding from the university.”

“Typically, our philosophy is to defray costs — not to subsidize — because we were working with a relatively small budget,” Briggs said.

“They were fundraising the rest of that,” Orr said. “We want to encourage fundraising because I think that’s a good practice. But in the same respect, the student organizations shouldn’t be fundraising all the time.”

In a proposal asking for more funds, SGA said student organizations reported struggling with constant fundraising efforts, which prevented them from using their time to fulfill their organization’s purpose and goals.

Orr said this creates uncertainty when planning for the future, and she wanted to remove that.

The desire for an increased SGA appropriations budget at YSU dates back to at least 2009.

Earlier proposals suggested a per-credit-hour or per-semester fee to students, which is how many other universities fund student government.

SGA’s initial proposal to the administration suggested a fee. McNally said they were confident they could allocate the money fairly easily.

“The amount of money we’re talking about for SGA frankly is a drop in the bucket when you consider the size of the university’s overall budget which exceeds $175 million,” McNally said.

The $125,000 is less than a tenth of one percent of the university’s budget, and allocating the funds eliminates the need to ask the state for permission to impose a fee.

“[That] is a politically dicey thing to do in the current environment in Columbus because the focus is on keeping tuition costs low and not increasing at all,” McNally said. 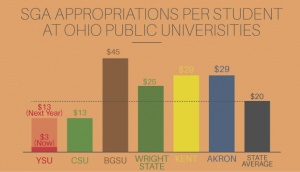 McNally said one of the key priorities of YSU President Jim Tressel’s administration is to enhance the student experience — evidenced by the creation of a Division of Student Experience. Increased funding to student organization can help realize that goal.

“You want to keep students on campus more. It helps with retention. It helps with student recruitment. All of which help with tuition revenue,” McNally said. “So we felt that this was something that was consistent with the focus on improving and enhancing campus experience.”

Orr said SGA is one of many ways to generate campus activity.

“These dollars can really feed directly into campus life and encourage student leaders to really lead their own events and hopefully have a better experience here at YSU,” Orr said.

“They had been writing grants to fund this,” Orr said. “Well, SGA could possibly give more to those sorts of events.”

Schriner-Briggs said the funds will allow them to reevaluate how the organization operates.

“It kind of fundamentally changes the way we can approach assisting student organizations,” Schriner-Briggs said. “We have an opportunity now to reshape our prerogatives.”

Orr and Schriner-Briggs said they want to establish a vision for the future of SGA over break and begin the process of creating a consensus with the body as a whole next semester.

“We want to have constructive conversations with our body and kind of get everyone on the same page and see where this year’s administration and this year’s general assembly want to take SGA,” Schriner-Briggs said.

They both said they are optimistic about the future of SGA and hope future administrations will benefit from the work they have done.

“We’re excited about being able to leave a mark and to hopefully help push SGA forward in a direction that enables it to maintain success in funding student organizations at a higher level,” Schriner-Briggs said. “Not just next year, but in the years to come.”