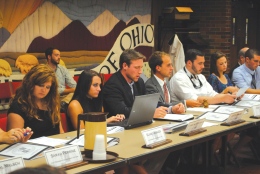 The semester’s first Student Government Association meeting, held in the Ohio Room of Kilcawley Center, began with encouraging words from former SGA President Mike McGiffin, who told current members to make the most of their years at Youngstown State University.

“YSU is part of the 4 percent of universities in America that do not have a program to introduce incoming freshmen,” Okular said.

He hopes to implement a one-hour seminar by next year that will help incoming freshmen make the transition to college life. The first-year experience program will take the tools of the current student orientation and implement them over the academic year to provide students with the support needed to ensure success.

Okular is also looking to change bulk tuition rates back to a limit of 18 credit hours. This would be an increase from the current range of 12 to 16 credits, which was implemented by David C. Sweet during his tenure as YSU president.

“It would encourage students to take more classes and create a quicker path to graduation,” Okular said.

Okular also wants to see a four-year graduation guarantee that would force YSU to better map out students’ schedules and guarantee that they graduate in four years.

On Saturday, SGA will become part of YSU Student Activities and work with Carrie Anderson, coordinator of programs and marketing.

“We wanted to keep everything that dealt with campus involvement and student activities together as one campus group,” Okular said.

The YSU Office of Student Life will move to Jones Hall.

Justen Vrabel, executive vice president of SGA, also spoke at the meeting, introducing his plan for a YSU sports and activities fan club he calls Yo Show.

“The Yo Show is a way for students to show support and give them a reason to come down to campus other than going to class,” Vrabel said.

Yo Show will support YSU football by taking a bus full of students to Heinz Field for Saturday’s game against the Pittsburgh Panthers.

“The fee will include transportation to and from the game, a T-shirt and food at the game,” Carney said.

Carney added that a committee meeting has not yet taken place, so the details of this year’s budget have not been finalized.