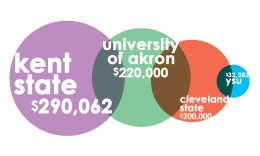 Cory Okular, president of the Student Government Association, is spearheading a campaign to increase the funds allotted to SGA’s appropriations budget.

The appropriations budget is currently a little more than $32,000.

The money goes directly to student groups for events and travel. In the 2011-2012 academic year, student organizations requested more than $182,000.

Okular said SGA is working to include a fee in next year’s tuition increase. He said tuition would not go up any higher because of this restructuring, but money from the planned tuition increase would be allocated to SGA’s appropriations budget.

“We really feel that this is a win-win for students because it’s not going to cost them anything extra, and they’re going to get so much more out of their tuition dollars because we’re going to now be able to give more funding to more groups,” Okular said.

At first, Okular said he intended to propose a charge of $1 per credit hour for full-time students.

“Per the advice of Dr. Anderson, we are going to request [an] incremental increase yearly, starting from 25 cents and working up to $1,” Okular said.

Erin Driscoll, the director of student activities, said she thinks the tiered structure is a smart approach and won’t burden students.

“In my opinion, it’s a worthwhile use of some of that tuition increase, and I believe that we have strong advocates across campus that really want our students to have great experiences here,” Driscoll said. “So, I hope that it’s something that can be taken seriously by the decision-makers.”

Okular said he hopes that budget will eventually rest at approximately $292,000, which his plan will enable.

The budget proposal SGA plans to submit stipulates that SGA’s appropriations budget will be made self-sustaining. This will eliminate the need for the $32,000 appropriation currently made through student affairs, following the final fee increase.

Okular said he hopes this increase in funds will foster more activity in student organizations and encourage more students to enroll at YSU.

“I think one of the main ways that YSU recruits is that you have organizations that bring students onto campus,” Okular said. “If we had more money, we could better advertise, reach out, maybe bring in more students.”

In 2009, Zach Brown, a former president of SGA, headed a similar attempt, which failed.

“[Zach] said a lot of it was he didn’t handle it correctly,” Okular said.

“Answering questions of people when they came talking to him, never really explained it. All kinds of rumors kind of caused it to die.”

Okular is revising the proposal originally submitted by Brown and the budget and appropriations restructuralization committee.

The plan includes a stipulation for excess money. Any money left over at the end of the year will be used for one of a number of options included in the proposal. These options include putting the money into a scholarship fund, donating it to a current YSU scholarship or contributing it to capital projects.

“If we do have leftover money, we can use it for good purposes,” Okular said.