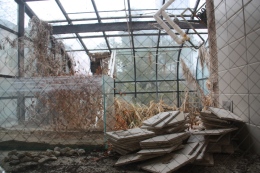 The greenhouse located in Ward Beecher Hall has three rooms, two of which are in use by YSU science classes. The third, pictured here, remains idle. The floor is sunken and overgrown by vegetation. Photo by Chris Cotelesse/The Jambar.

Members of the Student Government Association’s university affairs committee are hopeful that some of the vegetables served at Christman Dining Commons will be grown in the Ward Beecher Hall greenhouse in the near future.

Ed Krol, executive chef of dining services at Youngstown State University, initially met with Alyssa Olmi and Sarah Perrine — the chair and the president of the university affairs committee, respectively — to discuss how SGA could go about making his vision a reality.

“It’d be a really great thing to accomplish for sustainability and to have local foods available on campus,” Krol said.

If the project is successful, Krol said he foresees replacing between 10 and 15 percent of the lettuce needs in the campus dining facilities. Other items that will be grown include chives, basil, oregano and grains.

“Lettuce would be the main product grown in the greenhouse,” Krol said, adding that between salads and sandwiches, lettuce is the most used vegetable at Christman.Olmi said the project is generating positive feedback and enthusiasm from all involved.

“We are still in the beginning stages of completing the project, but I think we are headed in the right direction,” Olmi said. “We’re looking forward to pursuing it.”

Scott Evan, vice president for university advancement, said the plan is being evaluated. If it’s approved, the university will go forward with the process.

Renovations are necessary in order for anything to grow in the greenhouse.

“Rehabbing an existing structure is always full of surprises,” Evans said. “It may be a little early to establish a price tag.”

Gary Walker, the chair of the biological sciences department, said he is supportive of Krol’s plan, but he said that getting experts to help with the project will be difficult until repairs are made.

“It’d be very hard to attract a molecular biologist for the project without a working greenhouse,” Walker said.

Walker suggested that the university purchase a “portable greenhouse” in which to temporarily grow vegetables until the funds to rehab the greenhouse become available.

“[The greenhouse collaboration is] a vision at this point, and a lot of the details need to be worked out before there are any firm plans,” Walker said.

The greenhouse is made up of three chambers. The environmental science department uses two of the chambers for research and classwork, while the third, which is completely dysfunctional, is open to flexible use.

Previous attempts have been made in coordination with the department of geological and environmental sciences and Pete’s Place to use vegetables grown in a garden near Sweeney Hall in the diner.

EDITOR’S NOTE: Sarah Perrine is a reporter for The Jambar.