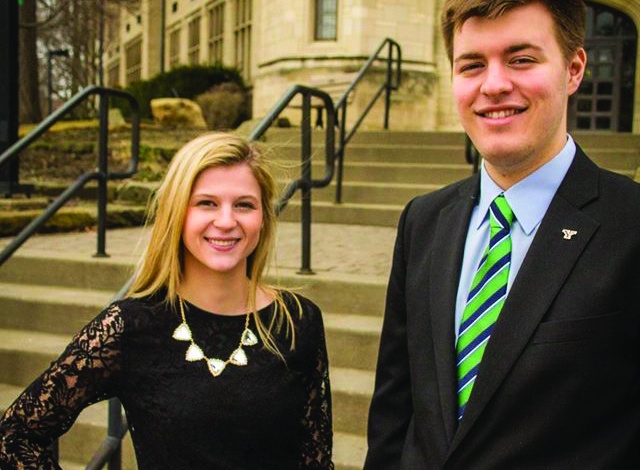 Student Government Association elections at Youngstown State University will be held during the week of April 6, allowing the student body to cast votes online and select the president and executive vice president for the next academic year.

The presidential candidates include Ashley Orr, SGA vice president for financial affairs, and Nick Chretien, vice president of YSUscape and a member of SGA’s university affairs committee. Their respective running mates are Jacob Schriner-Briggs, who is already serving as SGA’s executive vice president, and Ciara Andrews, an SGA representative on Academic Senate.

Orr has served on SGA since 2012; she said that the platform she and Schriner-Briggs have set up is based on student concerns.

“I really want to just speak to the students, hear what some of their concerns are and make sure that they know that myself and Jake will be spending our time and energy on making sure that those concerns are addressed,” Orr said.

Schriner-Briggs, having had a year’s experience serving as SGA’s vice president, said that he decided to run with Orr based on their shared ambitions for students as well as the student government body.

“I was excited to have the opportunity to run with her specifically because I think she is really well suited to be president, and me having experience being vice president, I just thought it was a good fit,” Schriner-Briggs said. “Together, we could do some positive things.”

The opposing team — Chretien and Andrews — are no strangers to SGA operations either. Chretien has been with the Student Government Association for a year, but had first contact with the group last academic school year when given funding for his student group, YSUscape.

“Last year when we first started our student organization, Student Government helped us out. They allocated funding to YSUscape and that was my first introduction,” Chretien said.

Andrews said that she has been involved with the group as well.

“I have had contact with SGA my entire time at YSU. My freshmen year I was on the board of elections and then my sophomore year I was on Academic Senate as part of the general education committee. This year I am also a representative for Health and Human Services as well as Academic Senate,” Andrews said.

Orr outlined some of the objectives that she and Schriner-Briggs plan to establish in the SGA body if elected.

“Something that I bring into possible administration of SGA is just a strong concern and care about our students, their initiatives and their ideas, and what they want to do. One thing that I bring to the ticket for Jake and I’s collaboration with the student groups is being able to continually fund and support. It’s a continuation of initiatives that I’m working on this year,” Orr said. “We’re trying to increase our overall funding to student organizations, not necessarily in the dollars per organization, but to organizations funded. We can also increase our support of the student organizations in addition to that.”

The student academic success initiative is one of the goals that Schriner-Briggs would like to have continued if elected. Some of the policies include being able to schedule for an entire year, improving or streamlining the advisement process and implementing a possible incentive program where students who are on track to graduate in four years would receive book store vouchers or tuition reduction.

“It’s something that Michael Slavens and I have been pushing and are continuing to push this year. Basically, it’s just a combination of policy recommendations for the university administration that we think would help YSU students graduate in four years and also help with graduation and retention rates,” Schriner-Briggs said.

Orr said that increased dialogue is just another one of the goals for the administration that she and Schriner-Briggs would enact if elected.

“We would really like to increase our dialogue with specific groups of students and just making sure that all students are represented,” Orr said.

Chretien explained the three themes for his and Andrew’s campaign: accountability, capacity and engagement.

“Our three main themes that we recognize, when we started meeting with people just our friends, talking about getting things going, I made them write down ‘What are the three things you would like to improve about Student Government?’ They all provided input. We came up with accountability, capacity and engagement. All of those three things, we’ve recognized deficiencies and we are going to improve them next year,” Chretien said.

Chretien explained what their platform would bring to benefit the student body at YSU.

Andrews added that she and Chretien would reach out to all students on campus and not just those involved in campus activities.

“We also want to make sure that we have a presence on campus for students who aren’t necessarily involved in student organizations, or maybe they don’t have a bunch of mutual friends on Facebook with students who are involved, and so we have a couple of things that are in the idea stage still. Just to be on campus, and get attention of students, maybe commuter students, and things like that,” Andrews said.

The slogan of their team is “Elevate Student Government,” and Chretien said that social media has played an important role in their campaign.

“The big thing that we have done is social media. That has been our basis so far since we haven’t had much time to actually plan face-to-face meetings. With that, we have gotten close to 275 followers with our likes on Facebook. People have been very receptive via social media. We got to get our boots on the ground, and that is the most important part — meeting with the student organizations,” Chretien said.

Chretien said that he is prepared for the election.

“I recognize that there are a lot of great things going on in the city. There’s momentum downtown, at the university, within student organizations on campus, and I feel that this ticket would bring it to the Student Government Association,” Chretien said. “We are prepared and we’re ready to go.”

Andrews added that social media has also given the two a support network.

“We have a great support network behind us, just with our Facebook it is showing. We have so many people behind us and supporting our efforts,” Andrews said.

Orr expressed her excitement for the upcoming election.

“I think that voter turnout is really important and it is something that SGA has been moving toward with our bringing out the voting platform online,” Orr said. “While its great to have a digital platform for voting, I still really value the human connection and just going out and speaking to the students, talking to student organizations during their meetings and then just one-on-one conversations.”