From the intersection of Wood and Wick streets, people marched through downtown to the Covelli Center and had a rally for the seventh annual Nonviolence Week Parade and Rally on Sunday. 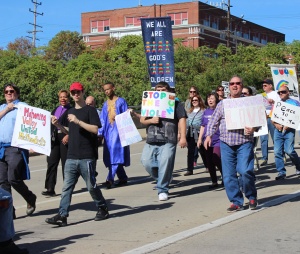 The Mahoning Valley Sojourn to the Past Organization kicked off Nonviolence Week in Ohio with the event. Sponsors of the event were John and Denise York and the Debartlo Corporation.

According to the Vindicator, 74 units and more than 2,000 people joined the parade this year.

Emma Myers, a senior at Joseph Badger high school, participated in Sojourn to the Past journey in 2015. Myers said the rally introduced these six Principles of Nonviolence:

“Try to think about these principles before you act,” Myers said.

Youngstown State University President Jim Tressel gave a speech at the Rally. During his speech he said YSU students are “truly great leaders for all of us.”

He introduced the cultural community by using an initiative with the little acronym of “RAISE,” which includes: Respect, Awareness, Inclusion, Spirit and tradition and Excellent through engagement.

“We are so proud our students are a part of this … our community … the leadership in our region. Our charge is for each and every one of us to go out and live nonviolence, to live inclusion, to live appreciation and love. And, every single one of us will do that,” Tressel said. “We are going to make a difference in this region and in this world.”

“We are committed to saying no more to violence,” Malone said. “We are saying yes to be a peacemaker.”

Participants called out the names and remembered those who had died due to violence.

The rally was closed with a traditional folk song, “This Little Light of Mine” lead by Minnijean Brown Trickey, one of a group of African American teenagers known as the Little Rock Nine.

People were smiling, holding hands, and started clapping their hands by Trickey’s lead.