Harry Potter fans got to experience a real life game of Quidditch, a sport from the series, on Sept. 7 at Wick Park. Prizes were given out to the best teams. 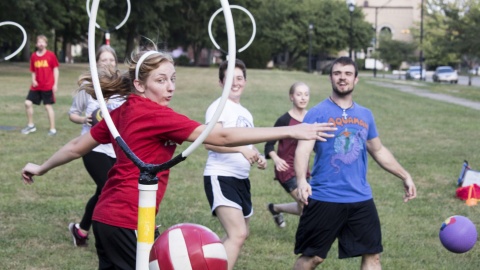 “Potter in the Park” was hosted by the Room of Requirement, a Youngstown State University student organization. Amanda Dradt, president of the club, said it’s fun to watch people bring this fictional game to life.

“It’s just a bunch of people having fun. Some people come up with really random stuff,” she said.

The event was co-sponsored by the YSU Recreation Center. They handled the marketing and promotion for the event.

Potter in the Park lasted for an hour. There were two teams, Hogwartz and Ilvermorny. With a final score of 100-80, Hogwartz won.

In the world of Harry Potter, wizards fly on broomsticks and try to throw a ball through a ring-shaped goal mounted on a pole to score. Quidditch is played a little differently in the real world.

“This is a muggle version of the Harry Potter sport, muggle being non-magic people. We don’t use brooms or anything like that,” Dradt said. “It’s based on the Harry Potter game, but we use a volleyball, dodgeballs and a tennis ball.” 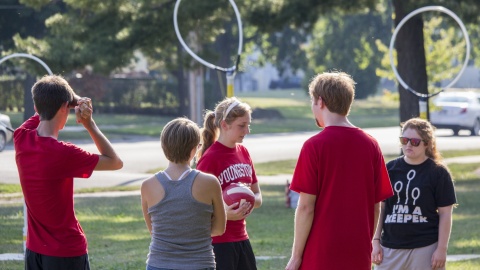 The volleyball represented the quaffle and was thrown through the hoops to score. The dodgeball was the bludger, which players can throw at the other team to keep them from scoring. A person holding a sock with a tennis ball in it is the snitch, and the other players try to catch the “snitch” to score more points.

Aaron Graneto, a member of the Room of Requirement, said the game merges dodgeball, soccer and tag.

“It introduces the students to a high intensity game that is fun, challenging and encourages teamwork,” he said.

Dradt said people are welcome to come watch the game before they participate to get a feel for the game’s rules.

“If you want to watch first that’s fine, get a feel for it but mainly just play nice with others, look out for all the big guys because it’s a contact sport,” she said.  “We just want to have fun.”

Dradt said nearby people joined the game, because they were drawn in by the Harry Potter music. The Room of Requirement plans on hosting three Quidditch events per semester. She encourages students to come explore and even watch the game.

“How fun would it be to tell your kids in 20 years that you played Quidditch for a sport in college?” she said. “It’s like this fantasy world of wizards that play on their broomsticks and stuff.”