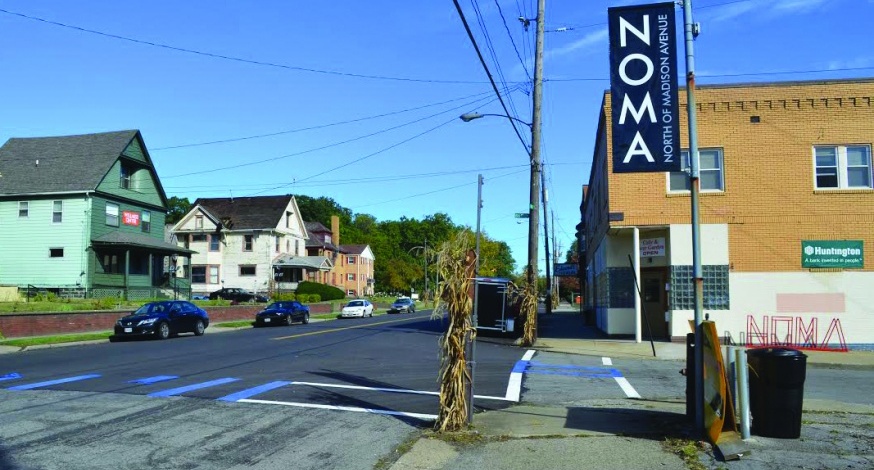 The second in a series of four Better Blocks was held on Elm Street over the weekend to the north of campus.

“[Better Blocks] take commercial streets in a community and they create a lively vibrant block or two,” Miller said. “They are usually a day and they help the community envision what it could be.”

“Do we need parking spots? Do we need better lighting? Do we need clean ups? What needs to be done?” Miller said.

There are anchors on the North Side, such as Dorian Books, Northside Farmers Market and Edward’s Flowers that bring some level of attention and stability to the neighborhood.

“The Lake-to-River Food Cooperative [Grocery Store] will open soon, and the Lake-to-River Food Hub has been in business for about five years,” Miller said. “We have some great anchors here, and we are just trying to revitalize our neighborhood. We really want to become a destination for local businesses. Whether it is a food business, local retail business, local neighborhood things.”

Rodd Coonce, owner of Full Circle Florist, said the event serves as an introduction to rebranding the area as NOMA — North of Madison Avenue.

“The Better Block is a kick off for the invigoration of this area,” Coonce said. “NOMA. This is what we are going to call this new part of town.”

The residents are optimistic that Better Block will bring attention to the community.

“Just because we are in an area that isn’t so full of life, doesn’t mean that we wouldn’t like to have things like a yoga studio, a hardware store, bike store, maintenance store or a decent place to eat,” Miller said. “But we are trying to help people think about what this neighborhood needs.”

Cindy Eastman, who has worked at Edward’s Flowers for 31 years, said she hopes it will make an impact.

“We’ve been looking forward to something happening since the 2000 campus campaign, but it didn’t go anywhere, so I hope something changes,” Eastman said.

The neighborhood and supporting groups are trying to bring light to what is needed in the area.

“It really works out because we have help from the residents, the business owners and even the mayor was here earlier,” Miller said. “The crosswalks were painted, they were not painted all the way, but at least the residents helped by adding some duct tape.”

The houses that were used as the place markers for the potential storefronts were acquired by the Common Wealth Kitchen Incubator over the last few months.

“What really impressed me about these Better Blocks, was once someone found out about our little neighborhood association that was trying to make a change in this area, people just started coming in full force, fixing the front of their buildings and things like that,” Miller said.

“We come up to the North Side farmers market all the time,” Fellows said. “I am hoping that we have a nice showing like this on the South Side in a couple of weeks.”

Coonce said he is satisfied with his neighborhood.

“I’m extremely proud to be one of the pioneers of this neighborhood, part of a neighborhood that is making a difference,” Coonce said. “Youngstown is a place you can make a difference.”