Youngstown State University and the YSU Foundation announced its public phase of the “We See Tomorrow” fundraising campaign on Oct. 25. The university is halfway to its goal of raising $100 million.

According to Paul McFadden, president of the YSU Foundation, the campaign has raised $51 million.

McFadden said planning for the campaign began five years ago, but it actually started on July 1, 2014. The campaign was kept private for three years and went public after reaching the halfway mark.

The project is supposed to bring new opportunities and renovations to YSU. The campaign objectives are to address the strategic priorities of opportunity, excellence and impact.

Each section of the campaign has an independent funding goal. According to McFadden, a student success center was President Jim Tressel’s idea, and the goal is to raise $12 million.

“We have over 40 different endeavors to support our students: career services, academic advising, mental health counseling, the Center for Student Progress. But, some are in the library, some are in Kilcawley, they’re here and there. We want to bring them all together,” McFadden said. 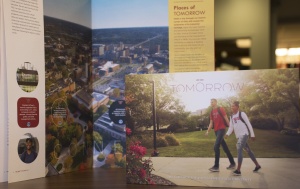 McFadden said the goal is to have all services available to students located in one building. He said the location is “to be announced.”

The Rich Center for Autism has a $4 million goal, which will go toward expanding the center. As of now, the center is on the first floor of Fedor Hall.

According to Melanie Carfolo, executive director at the center, the funding would go toward expanding to the upper and lower level of the building and putting in a professional development center.

“We would be able to invite educators from around the region to come in and learn about autism. We would be putting in a life skills center including a demonstration kitchen and rooms where students could practice independent living,” Carfolo said. “We are so appreciative of the community; they have always been supportive of the Rich Center.”

The center has 75 students, ages 2.5 to 18. Carfolo said they would like to double that amount.

Another major project of the campaign is the Mahoning Valley Innovation and Commercialization Center, with a funding goal of $14 million. Recently the Department of Economic Development awarded the university a $2 million grant for the project. The center will be located in the former misdemeanant jail downtown.

“Its main focus in additive manufacturing is 3-D printing. It will go beyond that, but we really think YSU is building a national niche, recognized excellence for 3-D printing,” McFadden said. “We want to try to build a synergy in an area we think we have expertise now.”

Ron Cole, public information officer at YSU, said the campaign is structured in a way to help YSU continue to strive for excellence.

“[YSU strives for excellence] in everything we do — ensuring student success, attracting internationally-renowned faculty, providing high-tech classroom spaces, offering scholarships and student work opportunities to help pay for the cost of school, keeping the campus looking beautiful, serving autistic children of the community and creating a new innovation center for the university and beyond,” Cole said.

The goal is to raise $20 million toward scholarships and student work opportunities, $10 million for campus beautification, $15 million for endowed chairs and professorship and $5 million for classrooms of the future.

“A wonderful family came forward and they want to help us prepare for classrooms of the future,” McFadden said. “The initial gift is going to provide three of these classes in each of our six colleges.”

Classrooms of the future is a way of taking traditional lecture-based classes and equipping them with Cisco Spark stations. This will allow students to watch the lectures at later times through a video storing system.

McFadden said the campaign cabinet played a huge part in the progress of the campaign, and they have been the key to opening many doors. He said he believes they will achieve the goal of $100 million in the next three years.

More information on the campaign and what it will bring to the campus can be found through the YSU Foundation.