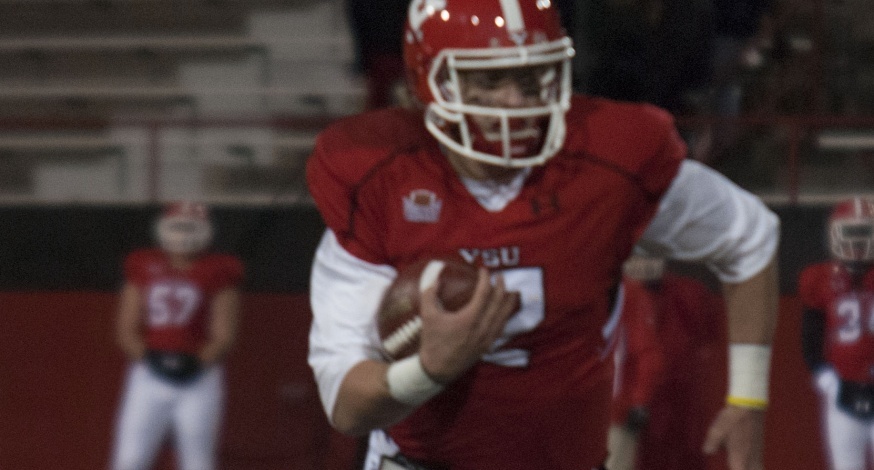 Nothing seemed to go right for the Penguins all game. The opening kickoff was muffed by returner Jody Webb and recovered by South Dakota State at the YSU 27.

YSU (3-3,1-2 MVFC) cut into the lead during the next South Dakota State possession. YSU cornerback Nate Dortch tackled Mengarelli in the end zone for a safety, but the Jackrabbits led 7-2.

South Dakota would increase their lead to 10-2 with 12:53 remaining in the second quarter after kicker Jay Carlson connected on a 37-yard field goal.

The next YSU possession, quarterback Hunter Wells threw a pass that went through the hands of his intended receiver, and was intercepted by Je Ryan. The Jackrabbits would take a 17-2 lead on a 20-yard touchdown run by running back Kyle Paris.

The Penguins would put together a 10-play drive to end the first half, but YSU had to settle for a field goal by Zak Kennedy after failing to score from inside the Jackrabbits’ 10 yard line. YSU went into halftime trailing 17-5.

YSU would score first in the second half, but the Penguins had to settle for another Kennedy field goal to cut the lead to 17-8.

The Jackrabbits would score two touchdowns by quarterback Taryn Christion, one rushing touchdown and one passing touchdown, in the fourth quarter to put the game out of reach.

Wells struggled again on Saturday — completing 18-39 passes for 153 yards and an interception. Sophomore Ricky Davis replaced Wells in the fourth quarter. YSU head coach Bo Pelini said the team should have played better, and a change at quarterback could come in the coming weeks.

“Believe me, every single guy that played in that game is going to be looked at,” Pelini said.

The 2009 season was the last time the Penguins were held without a touchdown. Their opponent in that loss was South Dakota State at Stambaugh Stadium on Oct. 31. That was also homecoming week.

“They played their asses off. They made a lot of plays and we didn’t make enough plays. It basically comes down to that at the end of the game,” tight end Shane Kuhn said.

Pelini took the blame for the team’s performance in the game, and said this was one of the worst losses he received in his coaching career.

“I apologize, obviously I didn’t have this football team ready to play. It was one mistake after another, and I don’t really have much of an explanation for it. I don’t know if I’ve been this embarrassed, this disappointed, in a long time…and I’ve been coaching a long time. We didn’t show up.”