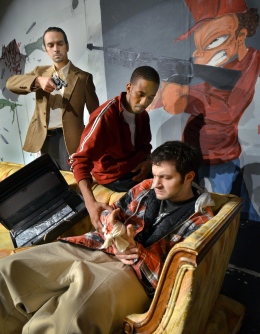 Sophomore Breylon Stubbs and senior Cheney Morgan will be dealing with guns, drugs and hustlers this weekend.

The play illustrates two swindlers, Mike “20-20” and Billy “Torch,” trying to run from local drug dealers. The brothers steal 3 kilograms of heroin and hide out in an apartment, plotting a good time to make their escape.

The language in the play is raw, boldly depicting life on the streets for urban hustlers in the ‘90s.

Morgan, who plays “Torch,” said this is exactly what attracted him to the play.

“I decided to do this because it is completely different from anything I’ve ever done before,” he said. “I’ve always played the real nice guy.”

Senior William Grant is directing the play and said he chose it because it is applicable to the area.

“It represents part of the city for different reasons,” Grant said. “It’s supposed to represent what would happen if someone was in this kind of situation. It makes you ask, ‘If you had to betray your best friend, would you do it?'”

Grant said this play is the first of its kind for YSU’s theater department, and he hopes it produces a wholesome reaction.

“Nothing has come to this extent,” Grant said. “We wanted the audience to experience it well before the play even starts. If we capture them in their seats, we’ll definitely capture them on stage.”

Because of the amount of foul language, Grant has constructed a nickname for the show.

“I always call it ‘Scarface on steroids,'” Grant said. “I’ve heard the F-bomb dropped so many times in this play that it’s like it blanks out itself now.”

Stubbs said he “pre-warned” his family and friends about the graphic nature of the performance so they were prepared.

November’s auditions attracted many newcomers to the theater department, including Stubbs.

“Riff Raff” will be Stubbs’ first performance. His character, Mike “20-20,” is one of the lead roles.

“My main reason for doing this is to learn about acting on stage and improve my skills within the craft,” Stubbs said. “I want to bring my character to life because this isn’t something that usually comes to YSU.”

The artwork and backdrops for the show were constructed and decorated by YSU students, the theme of which was “fight for survival.”

Junior Hector Gonzalez painted a scene that will be used throughout the play. The backdrop portrays a young man, holding a gun, fighting off a fictitious monster that is protruding from the wall.

“The characters are all monsters at some point; they’re all a victim,” Gonzalez said. “I was pretty much thinking that everyone in the play gets backed into a corner at some point.”

Gonzalez said this was the first time he was approached to do art for a student production, but he would do it again because it was a lot of fun.

Grant said the painted phrase “increase the peace” most embodies the message of the play. Audience members see it as soon as they walk in the door.

The graffiti-filled wall showcases names of impactful people in the students’ lives. Jamail Johnson is also honored on the wall.

Johnson’s life was taken on Feb. 6 during an off-campus shooting.

“I think it’s a positive message. We’re basically paying respects to not only him, but people we’ve loved and lost as well,” Grant said.

“I wouldn’t trade my experience here for anything,” Grant said. “The theater department has saved my life. I could be working a 9-to-5 job. Being in this department is like a close-knit family.”

Grant’s hope is that everyone has a positive, life-changing experience.

“I think this play can reach out to any generation, but the thing about theater is that you can’t always expect to see ‘Oklahoma,'” Grant said. “We wanted to go outside of the box with this play.”

He said he wants people to know how much work the students put into the performance.

“We entertain people, and I consider it a blessing to be in this position,” he said.