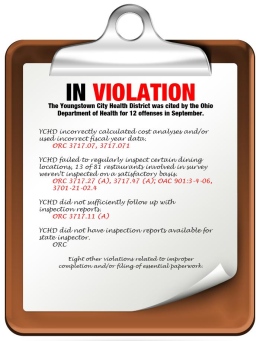 Youngstown Mayor Chuck Sammarone met with Erin Bishop, acting health commissioner; Anthony J. Farris, law director; and other city officials on Monday to discuss a plan of action to correct problems cited in a recent survey of the Youngstown City Health District by the Ohio Department of Health.

The survey, conducted every three years, found 12 violations out of 41 criteria. A 2009 survey found only three violations, all relating to improper paperwork.

The Youngstown City Health District has until mid-January to file a plan of correction with the state and implement those corrections by March 1 — or else face sanctions.

Among other violations, the city health district neglected to inspect city restaurants for years at a time — 11 are located on the campus of Youngstown State University. Out of 81 random locations selected by state surveyors, 13 were missing the proper amount of inspections.

Sammarone said he instructed the health commissioner and all of the supervisors to maintain responsibility a year ago.

Sammarone said he wanted to know what happened and why timely inspections weren’t done from 2007 through 2011.

He said he inquired about who is responsible and asked Bishop to start an investigation to obtain that information.

State Rep. Bob Hagan said he was outraged by the fact that the Youngstown City Health District ignored these inspections. Hagan plans to introduce new state legislation, which would enact tighter regulation on health departments.

He said although he received word that the department was mending the problems, the issue isn’t resolved.

“That doesn’t alleviate any of the fear or feelings of paranoia that the food being served to students is safe,” Hagan said. “They said there has been some improvement, but it was only done in a haphazard, hurried way. “

Hagan said certain laws and regulations are set up to protect taxpayers. He said he doesn’t want the Ohio Department of Health to let the local department wait until March to rectify the issues.

“I want that done immediately,” Hagan said. “The taxpayers are paying money in the city of Youngstown to make sure that our students eat safely and that their food is safe to eat. They’re being ignored.”

Ron Cole, director of university communications, wrote in an email that “the university has in place — through its food services operator and the food establishments on campus — several food safety programs in place to ensure that any and all food served on campus meets the highest standards in the industry today.”

Sammarone said he will continue to pursue action to ensure that city restaurants are safe.

“I don’t like excuses. You have a problem. … Somebody made a mistake. Period,” he said. “ Let’s correct and make sure it doesn’t happen again. That’s how I operate.”