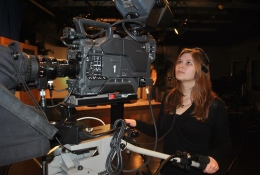 Fall graduate Emily Russo has spent four and a half years behind the telecommunications department’s cameras delivering news. Photo by Chelsea Telega/The Jambar.

Emily Russo has spent four and a half years at Youngstown State University in front of and behind a camera.

Russo has been involved in the twice Emmy-nominated television show “Homework Express,” online webcast “Light the Wick” and website and video designing for the College of Science, Technology, Engineering and Mathematics.

She is currently working as a video journalist for the Business Journal, website design company Chicago 48 and Prodigal Media, which is creating a commercial for Sheely’s.

Russo had a specific goal when she started college and has exceeded her expectations.

“I went to college to be a video editor, and that is all I wanted to do. I did come out of YSU as a video editor, but I also came out a videographer, television director and producer, a graphic designer and a Web designer,” Russo said.

Russo chose YSU because it was close to home and within her price range. The college served as much more than that to her, though.

“I really enjoyed my experience at YSU. I loved how many opportunities I got,” she said. “My favorite part of YSU was being able to get involved in groups outside of class, which really helped me gain friends while gaining experience.”

“YSU is different than other colleges because it’s smaller. I feel like if I was in a bigger school I wouldn’t get as many opportunities,” she said in an email. “Many opportunities have come to me because it was easier to stick out with less people. Having time to speak to professors individually was also great for this reason.”

The telecommunications department became like a second home for Russo over the years and provided her with some of her fondest memories.

“My best memories involve working at ‘Homework Express.’ I have been there for almost five years, and I feel like the crew is my second family. It’s also satisfying to start out with the lowest job, then grow to being one of the top student producers of the show,” Russo said.

Friends, professors and colleagues have been Russo’s greatest inspiration, and she said they always kept her going when she lost motivation. She urges other students to surround themselves with positive reinforcements.

“My advice is to get involved in anything that would interest you. Just going to class doesn’t teach you as much as a hands-on experience can. YSU has a lot of things to offer students, take the opportunities,” she said.

Although Russo didn’t have a “favorite professor,” she attributes a number of her successes to the effort they put forth to get her to this point.

Telecommunications professor Fred Owens has worked with Russo in the department for years and has seen her grow in many ways.

“To see a young person grow and mature and to prepare for a life both personally and professionally is most gratifying, especially when the person is doing as well as she is and has such high standards as Emily does,” Owens said.

Owens makes it a personal goal to help students eradicate their confining comfort zones. He said Russo did just that.

“Emily, during the period that she has been here, has become not only willing to take on new assignments and new projects, but she was eager to do that,” Owens said.

“And, when a student is willing to move out of their comfort zone, they can achieve anything.”

Owens has no doubts about what Russo can make of her future and said that she will define her own life.

“She’ll set her goals. She has the capability, she has the intellectual horsepower, the people skills and the team- leading abilities,” Owens said. “She’s just a rocket.”

“She’s really developed as a leader. She always came in with enthusiasm, and she went past her comfort zone taking on a leadership position,” Crawford said. “She flourished.”

Crawford always noticed a great deal of enthusiasm in Russo and said that she knows if she keeps that attitude, she will go far.

“I think she’ll accomplish whatever she wants to accomplish,” Crawford said. “She has that rare mix of creativity, humility, dedication and intelligence.”

Crawford said she is proud to call Russo a product of the telecommunications department.

“She’s one of those students I feel bad taking credit for because she’s so driven and focused and she’s such a self-starter,” Crawford said. “But I hope we’ve helped to inspire her, and she has definitely given back to the program.”

Owens does not foresee Russo’s name being forgotten any time soon at YSU.

After college, Russo plans on continuing her work at the Business Journal, Chicago 48 and Prodigal Media.