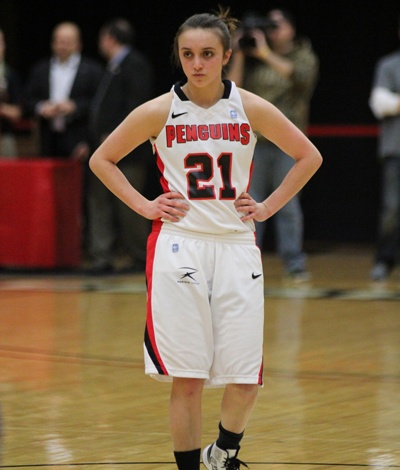 It is a well-known fact that athletes are some of most recognized people on a college campus, even more so when they are the starting running back for the football team or the starting guard for the basketball team.

With those roles come certain expectations such as being a leader on the field, a mentor off the court and representing the program in all facets of life — both at and away from school.

Every autumn, there is an event that almost every school across the country will participate in. It’s when alumni return to their campuses, school spirit runs high and a select group of men and women compete for the highest honor that can be given for the event: homecoming.

This year, looking for another victory for the Youngstown State University athletic programs — this time off the field — are senior running back Torrian Pace and senior guard Liz Hornberger.

“I don’t picture myself as a homecoming queen, but I don’t what to seem like I’m unappreciative of it. I’m really happy I got nominated,” Hornberger said. “It’s really nice to get recognized like that. So I must have done something right in the four years I’ve been here. I must have been somewhat nice to people.”

Hornberger and Pace are both seniors majoring in criminal justice and have had classes together in the past.

“I’ve had a couple classes with Liz, we’ve studied together and helped each other out. I think a couple of semesters ago, we had two classes together. … We have a very good relationship,” Pace said.

Hornberger said that Pace has been in her major since her freshman year and that she’s known him more through her major than athletics.

“He’s the nicest athlete I’ve met here,” she said. “Not to diss any other ones, but he’s always smiling, always willing to help me out with my homework, or if I need a question, he’s always there. He always volunteers, and I can’t say anything bad about the kid.”

Both Pace and Hornberger were nominated by their teammates, who are also running their campaigns for homecoming king and queen.

“The team seems like they’re real into it; they’ve been helping to make signs and campaign, so it’s really fun for us, and it helps us get closer by doing that,” Hornberger said. “I made cookies the other day with basketballs on them. I’m not real good at baking or art or anything, so thank God I have Taylor [Hvisdak] and Ashley [Lawson] and all them are into it.”

Ultimately, Hornberger and Pace’s goal is to do what they always want to do — win.

“I’m really honored to do it. It’d be great to win just for the whole athletic department because they haven’t won in a while,” Hornberger said.

Pace said that it would be really cool if an athlete were to win.

“I think that in the sense that homecoming queen and king is always the sororities and fraternities that get out there more and win it; I can’t remember the last time an athlete won it, king or queen, and it that sense, it’ll be really cool,” Pace said.