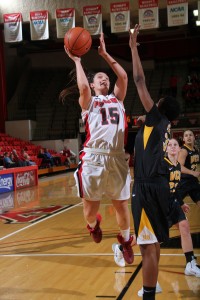 Youngstown State forward Heidi Schlegel (15) goes up for a shot while being defended by Virginia Commonwealth’s Ryen Henry during the second half of Saturday’s season opener at the Beeghly Center. Schlegel lead the Penguins with 27 points and nine rebounds in YSU’s 85-66 loss agsinst the Rams. Photo by Dustin Livesay | The Jambar