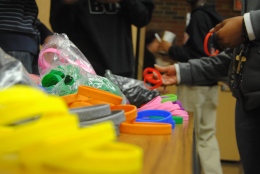 The College Swag Boys set up a table in Kilcawley Center to pass out bracelets in remembrance of Trayvon Martin. Photo by Chelsea Telega/The Jambar.

Nearly two months ago, Trayvon Martin was shot and killed by a neighborhood watchman in a gated community in Florida.

George Zimmerman, charged with second-degree murder, told police that the incident transpired out of self-defense, saying that Martin punched him in the nose and repeatedly hit his head on the sidewalk.

The incident has drawn national media coverage surrounding the 17-year-old’s death and what some suspect is another case of racial profiling.

One Youngstown State University group has taken the event to heart, and its members wish to dispel the stereotypes of black youth and raise awareness of crime.

Freshman Dorjan “Johnny” Shivers and seven other members of College Swag Boys set up a table in Kilcawley Center on Monday.

They passed out more than 1,000 bracelets inscribed with “#CSB/BSU Supports I Am Trayvon Martin.”

The CSB, formed under the Black Student Union, was created in the fall to increase community service among the area’s black youth. The group is made up of black YSU freshmen.

Shivers said it was imperative for the group’s members to use Martin’s death as a way to raise awareness locally.

“We are raising awareness to people that this can happen anywhere — even though this was in Florida,” Shivers said.

“Sometimes people aren’t aware of it. It just happens, and people tend not to notice.”

Shivers said he feels that not many people in the area have taken time to remember Martin, and he wants to do his part to put a stop to what he calls “racial profiling.”

Racial profiling has a history in the U.S., said Cryshanna Jackson, an assistant professor in YSU’s political science and pre-law department.

Jackson said mass incarceration of African-Americans started around 1977, and that it continues today.

According to U.S. Census Bureau and Department of Justice statistics, blacks are more than twice as likely to be arrested.

Jackson said African-Americans are disproportionately represented in jails because of social implications, like economic status and the lack of support networks for outgoing prisoners.

“The way our justice system is set up, if you don’t have money, it’s harder to get a lawyer, and according to statistics, African-Americans are poorer,” Jackson said.

The median household income for black families was nearly $20,000 less than white families in 2009, according to the U.S. Census Bureau’s American Community Survey.

“Recidivism rates are high too because there is no support network,” Jackson said, adding that no one wants to address racism because it makes people uncomfortable.

Blacks are also more likely to be victims of homicide.

Nearly half of all murder victims in 2010 were black, according to the FBI’s Uniform Crime Reports. The highest incident occurred in black males, of which 5,505 fell victim to homicide.

“We have a lot of things happening here, homicide situations, so it’s good to raise awareness in our city,” said Shantal Edwards, a YSU student. “There’s been a lot of light shed on this because the same things are happening here; they just may not make national news.”

Edwards said she feels everyone is too hostile, and criminal activity seems to be on the rise in the area.

CSB member Emeka Obinnakwelu said he is uncomfortable with the racial discrimination he faces. He said some people label blacks as “uneducated and mean,” but that’s not always the case.

“There have been big issues with racism and how black people are discriminated against,” Obinnakwelu said. “This is an urban campus, and we want to show people that social issues exist, especially in urban places like Youngstown.”