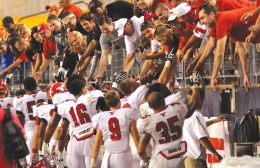 Youngstown State University players celebrate with fans after their 31-17 victory against the University of Pittsburgh on Saturday at Heinz Field. Photo by Dustin Livesay/The Jambar.

The Youngstown State University football program has been in thissituation before.

Following last season’s 27-24 upset victory at North Dakota State University, the number one team in the country at the time, the Penguins returned home for a game they were favored to win.

Hosting Missouri State University — with a 1-9 record — the Penguins were defeated, 38-34.

“I think we kind of got a big head after beating [NDSU] and went into the [MSU] game expecting to win,” said running back Jamaine Cook at Tuesday’s press conference.

So when the Penguins — fresh off a 31-17 upset of the University of Pittsburgh at Heinz Field — welcomes Valparaiso University to Stambaugh Stadium on Saturday, the team will not overlook the Crusaders, who they defeated, 77-13, in 2011, said head football coach Eric Wolford.

“I’m hoping we learned our lesson,” Wolford said of the MSU loss. “We have to focus on what we can control and being ready to play every week. The opponent is not the factor. It’s about us.”

The matchup against Pitt was certainly all about the Penguins. In arguably one of the biggest wins in school history, YSU not only defeated the 18-point favorite Panthers, but also dominated them in various statistical categories.

“It was a great win,” Cook said. “But we have to have a short-term memory and forget about it. We’ve got Valpo this week.”

Riding the excitement from the season-opening victory, Wolford said he expects the Ice Castle to be filled at 4:05 p.m. against the Crusaders.

“It’s obviously exciting, and this is a chance for our community to come out and show support for our football program,” Wolford said. “We have an exciting brand of football to watch. I think our kids, players and program deserves a full house.”

With the way tickets have been selling, it should be a crowded home opener. The athletics department — which opened ticket sales early — reportedly sold more than 1,000 tickets on Monday alone.

“It’s great to have the community behind us, selling that many tickets in one day,” said tight end Will Shaw. “We look forward to having so many fans behind us at Stambaugh Stadium.”

Valpo’s 2011 trip to Youngstown proved to be a record-setting day. On their way to a school-record 77 points, the Penguins also set records in total yards (657), points in a quarter (35) and first downs (34).

“I think they’ll be anxious to come here and play us with the opportunity to show they’ve improved since last year,” Wolford said.

“They have some players returning,” Cook said. “But we’re confident whatever they run or do, we’ll be able to execute offensively and defensively.”

For their victory against Pitt, the Penguins have reaped the benefits. Up from 18th, YSU is now ranked 10th in the Football Conference Subdivision coaches’ poll. They also move up to sixth in the Sports Network Top 25, where they were 13th last week.

“We don’t even talk about that,” Wolford said of the rankings. “We never will. The only poll we’ll worry about is the one after [the championship game].”

While there’s still a long way to go before that, Wolford has a simple request for Saturday’s opener.