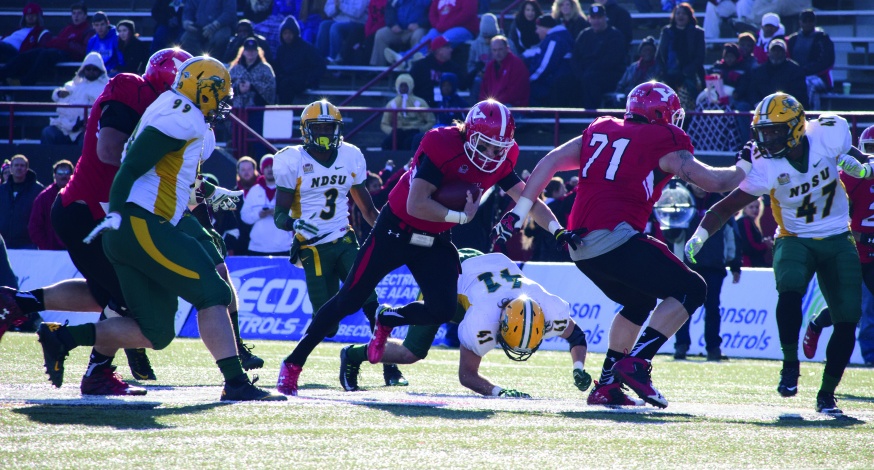 Rookery Radio has its fair share of sports-themed programing, but the station created a new radio show that tackles YSU football from a different point of view. On Wednesday, “Rick and Roth in the Morning” aired for the first time.

Every Wednesday morning Youngstown State University quarterback Ricky Davis and his co-host Jeff Rotheram sit in front of the mics for a weekly discussion on YSU football.

A show featuring YSU athletics isn’t anything special, but Davis said “Rick and Roth” focuses on the latest YSU athletics news from the perspective of the student-athletes.

“We give the athletes’ side of it. We’re in the team meetings, we’re in the locker room and we know what it’s all about,” Rotheram said.

The show began as Davis’ assignment for Kenny Reyes’, Maag library media technical assistant, radio workshop class. Davis chose Rotheram when he decided to add a co-host to his program.

Rotheram said the program appeals to die-hard sports fans and casual fans. He said his chemistry with Davis provides some entertaining conversations because they “don’t take it too seriously.”

Davis and Rotheram will focus on YSU football and will bring guests on the show every week from the team. Davis said future guests will include defensive end Derek Rivers and YSU offensive coordinator Shane Montgomery.

“So on the last one we talked about coach [Bo] Pelini, his introduction back to the city, how the season went, past and future of coach Pelini, and we talked about the coaching staff, the new additions he brought in and those he kept,” Davis said. “And then we talked about some attendance problems on Saturdays — what can we do as a team to fix it and what can we control.

“As far as topics in the future, I know next Wednesday we’re bringing on Armand Dellovade, who played linebacker as a true freshman. He’s from western PA [Pennsylvania], and offensively we’re going to talk about some individuals. He’s going to help us branch off defensively. We’re going to ask him how he thought the season went, how his first year went and goals for next year.”

“Rick and Roth” was supposed to end at the conclusion of the semester, but Davis said Reyes is interested in extending the program past the spring. Davis doesn’t know how long the show will last.

Davis and Rotheram have received support from the athletic department since the start of the show. Davis said their teammates have been the most supportive and have tried to spread the word about the program.

“I know our teammates are very excited about our show,” Davis said. “It seems like on social media they’re trying to spread the word. We’re kinda giving the team a voice. We have fun, and we get the facts across.”