Fall means hoodies, bonfires and the Walking Dead, unless of course you play Humans vs. Zombies, which is all about live zombie slaying. 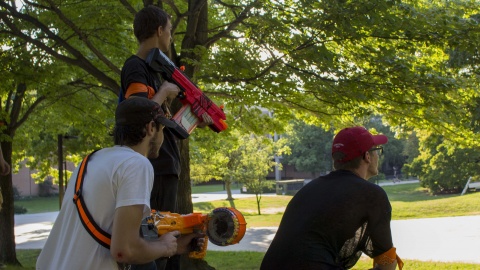 In Humans vs. Zombies, there are two teams- humans and zombies. The humans wear orange bandanas around their arms and carry Nerf blasters, as well as balled up socks to act as pretend grenades, across campus while trying not to get tagged by the zombies that wear bandanas around their heads. The humans are also allowed to use fake “blowpipes” to defend themselves, which are really (PVC) no longer than three feet.

If a zombie ends up tagging a human, then that player becomes a zombie and tries to tag other humans until the game comes to a close. The humans try to keep the zombies away by stunning them with their Nerf blasters, and if the zombie gets stunned, then that zombie cannot interfere in the game for 15 minutes.

The game is a week-long event from Sunday Sept. 18 through Friday Sept. 23, and is only over when one of two things happens; the zombies succeed in turning all the humans or the humans make it to the final mission on Friday.

The final mission usually follows the theme of the game’s storyline and challenges the remaining humans to defend themselves against the zombies for an allotted amount of time. This year the game’s theme is “carnival.”

“We always try to do something different every game,” said Tyler Matthews, game director of the Urban Gaming Club. “We don’t want it to just feel like the same experience every semester for people, so we’re constantly trying to push the boundaries of what we can do with the game.”

Matthews graduated from Youngstown State University in May of 2016 with a Bachelor of Arts degree, but still remains very involved in this event as an alumnus moderator. YSU allows alumni moderators to stay active in a group for two years past their graduation.

“Last fall we had around 140 players, and we’re hoping to have the same amount if not more players this time around,” Matthews said.

While the event itself is this week, there will also be a Humans vs. Zombies Invitational on Oct. 7 and 8, where players are invited from across the country to participate in this game with students here on campus. There will also be a Nerf Buy/Sell/Trade event on Sept. 30 from 3-5 p.m.

“It actually started between friends as a game in the park in August 2010,” said Kaitlin McClendon, president of the Urban Gaming Club. “Eventually it grew, and in spring 2013, we had the first on campus game, which is also when the club was founded.”

McClendon is a junior at YSU with a double major in biology pre-medicine/psychology and a minor in chemistry.

“We are also considering holding board game nights, in the wake of Modern Board Game Club falling through this year,” McClendon said.

Over the past few years, it would seem that there have been quite a few memories made participating in this activity.

“There was one time last year, where the theme was college life,” Matthews said. “The Tuesday mission was based on a toga party, and you had to help your friends who had a little too much to drink get back to their rooms.”

To find out more about Humans vs. Zombies, visit the YSU Urban Gaming Club page on Facebook.