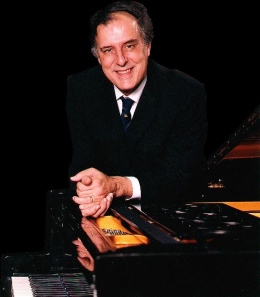 Roman Rudnytsky will return to the Dana School of Music for a guest piano recital on Feb. 26 at 3 p.m. Rudnytsky, who was a Youngstown State University faculty member since 1972, has traveled all over the world and has played concerts in nearly 95 countries.

The Juilliard School graduate will play selections from Chopin, Debussy and Beethoven in the Bliss Recital Hall. YSU faculty, staff and students are thrilled to have him back on campus after his retirement in spring 2011.

She said Rudnytsky’s international experience might appeal to students.

“This concert will introduce students to varieties and different kinds of music, including modern and classical,” Ruscitti said. “It’s a wide variety that they get exposed to that they probably wouldn’t anywhere else.”

Rudnytsky’s concert venues range from the Sydney Opera House to cruise ships, as well as small islands in the Caribbean Sea and Pacific Ocean.

“I’m currently playing two pieces from Chopin and Beethoven also, so it’s similar to what I’ve been practicing,” he said.

Knezetic said he plans to use this concert as a way to compare himself to a professional adult pianist.

“It’s kind of for my own benefit to listen to his technique and style and get ideas,” he said. “I want to see how he implements the piece, and I just really enjoy hearing piano music from someone so accomplished and renown.”

“He had an ability to talk to students about the music they would hear and then played a part of it for them,” Crist said. “He used the piano as a teaching tool.”

Crist said Rudnytsky’s passion for music showed in his lessons.

“He is a great piano performer. …  One of the greats in the world,” Crist said. “It’s exciting to have him back.”