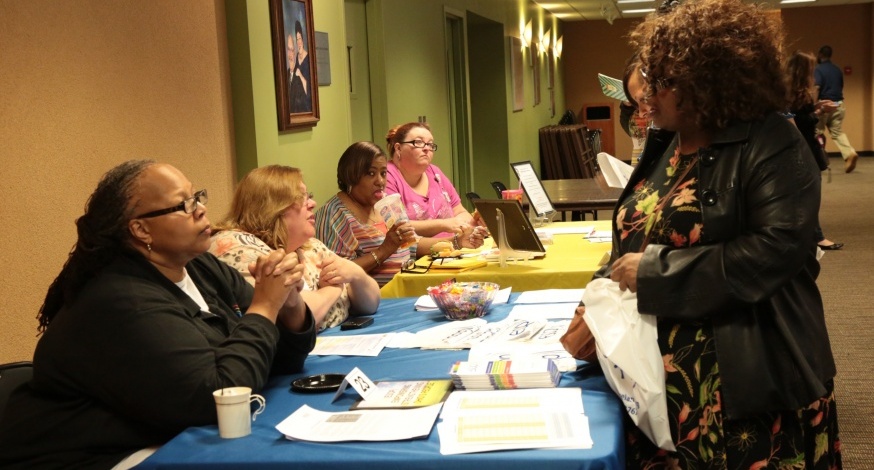 Reentering society can be difficult — two-thirds of prisoners in the United States are rearrested within three years of release — but several organizations in the Mahoning Valley are working to make it easier.

More than 40 agencies came to Youngstown State University for the third annual Hope Conference on May 13. The conference—organized by the Community Initiative to Reduce Violence—offered help to individuals with criminal backgrounds looking to transition successfully back into society.

Guy Burney, coordinator of the CIRV, said having several different services available makes it easier to accommodate the individual needs of each participant.

“The ultimate goal is to give people resources tools and knowledge, so that they can go back out and have some hope that they can make it,” he said.

Burney said many people assume people who commit felonies but avoid prison have a better chance of getting a job than an ex-prisoner, but that’s not the case.

“They experience the same issues that a person who was in prison goes through,” he said. “It’s really important that we realize that. Some people didn’t actually serve a prison sentence but that mark is on their record.”

The conference included a Certificate of Qualification for Employment clinic. Residents who are granted the certificate must be considered for employment despite past convictions. Burney said it accompanies a person’s application and improves their chance of being hired.

Michael Vickers, a participant, said felony charges follow people trying to find employment, even if several years have passed since the conviction.

“I think it’s a real good thing for people in situations like that to come out [to the conference], so they can realize there’s still hope for them and [there are] ways to be entered into the workforce even though they have a background,” Vickers said. “It’s uplifting.”

Hope Lovrinoff-Moran represented Ohio Change Addiction Now at the conference. She said it’s important that people don’t fall back into using drugs after their release from prison.

“I want to bring attention to the issue and educate the public and let them know what they can do about the issue,” she said.

Sonya Edwards from Empowering and Strengthening Ohio’s People said her agency helps people by offering financial counseling. She said it’s difficult when people get jobs and things like child support and restitution start coming in.

“It’s our goal to figure out how they can get through that part—navigate it so they stay legally employed—and we do see success stories,” Edwards said.

Maggie McClendon from YSU’s Office of Admissions was present to assist anyone interested in attending YSU — the university accepts applicants not convicted of violent or sexual crimes.

She said hundreds of people with criminal backgrounds have graduated from YSU. Social work and counseling are popular among former prisoners. McClendon said they want to help others navigate situations they went through.

The problem is keeping people on their feet while attending school.

“There may not be enough financial aid or funding,” McClendon said. “If they can’t find employment because their record is keeping them from finding good employment, then they are underemployed and they are unable to make their bills.”

Michael Favors, a conference attendee, said it restores lives and makes the city a better place to live. When he was released from prison, he said he was dismayed to find there was little support for him to start a new life.

He’s been off probation for two years, and he said he’s been staying with friends until he is able to get employment and make his own living arrangements.

“Because of some of the convictions I’ve had, I can’t even qualify for some programs—that’s what’s hurting me,” Vickers said. “That’s why I came today, to get help.”