“Too few schools have identified how resources will be focused on the most crucial priorities: affordability for students and tangible investments in the quality of their education.”

-Progress Report: An evaluation of how institutions responded to “Action Steps to Reduce College Costs”

At the Board of Trustees meeting on March 15, Neal McNally, Youngstown State University vice president of Finance and Business Operations, expressed his frustration at a state-produced progress report that claimed Youngstown State University needed to improve at generating savings to benefit students in utilizing existing contracts, conducting cost diagnostic and five other categories. 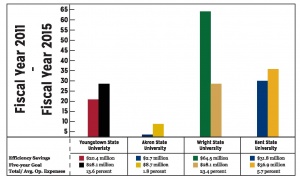 McNally called the report a “political tool,” saying it didn’t outline the work that the university has done to make college more affordable, such as freezing the tuition cost in 2015.

“Going forward, we hope to have the opportunity to clarify what we are doing because we are doing great things in a lot of these categories,” McNally said.

Textbook affordability is one of the categories that the task force made recommendations on, and it’s one that affects students directly. YSU President Jim Tressel said YSU Provost Martin Abraham has been working with the Student Government Association to promote textbook affordability by promoting high-quality open source textbooks and providing Maag Library with textbooks that can be rented by students.

Despite these initiatives, the frustration of McNally and other administrators stems from the poor progress and evaluation scores given to YSU in the report, one of 13 state institutions in Ohio profiled within it.

The progress report, written by the Ohio Task Force on Affordability and Efficiency in Higher Education, is a follow-up from a list of action steps that were delivered to Ohio universities in 2015 by the task force.

Ohio Governor John Kasich created the task force to address a major problem in Ohio. According to the Action Steps to Reduce College Costs report, Ohio universities have the 12th highest average cost of tuition and mandatory fees in the United States. Kasich mandated that Ohio public universities have to reduce the overall cost of higher education.

Tressel and McNally believe the report does not reflect the current cost-saving initiatives occurring at YSU. Tressel said the ratings reflect the lack of detail on their initiatives that was sent to the task force in the updated plan.

For example, in areas where YSU received a “U,” the task force commented that the “diagnostic was not completed” and “tracking of results and benefits to students is needed.” In the category of five-year saving goals, where YSU reported a five-year goal of $28.1 million, the report stated there was “detail needed about plan to benefit students.”

The progress report stated that, “only three institutions earned strong ratings on the recommendation to create five-year plans for efficiencies and new resource generation, largely because many institutions did not provide clear plans for directing benefits to students.”

“We are constantly working on making college more affordable and more efficient,” Tressel said. “When we see the areas where we could do better, we ask if we have to better communicate the way we can show people we lowered the cost.”

McNally said some universities may have invested money in having consulting firms write to the state about their progress, but because that is costly, they had their plan done in-house. He said they already achieved some of their goals outlined in the action steps.

“We got a ‘Continued Progress Needed’ score in the operations review, but we thought we did a robust job of operations,” McNally said. “We outsourced our student clinic from Mercy Health, and we entered into two ground leases last year to develop student housing. Maybe we didn’t do a good job of communicating this.”

The progress report serves as a warning that universities need to improve their efficiency savings and make college more affordable for university students in Ohio.

How do the public universities stack up?

As far as affordability, YSU is the third most affordable public university in Ohio, according to the National Center for Education Statistics. Tuition has been capped at $8,317 from 2015-2017. The average cost for an Ohio university, based on data from U.S. News and World Report, is $11,136.

However, schools that are more expensive, such as The Ohio State University, score higher in college rankings. The U.S. News and World Report ranked OSU as the #54 best university in the country, with Miami University and the University of Cincinnati ranking #79 and #135, respectively. YSU’s rank was not published.

According to U.S. News and World report, only universities that are ranked in the top three-fourths of their category have published rankings. In other words, if a university doesn’t have a published ranking, they scored in the bottom 25 percent.

McNally said YSU has been striving to generate efficiency savings and find ways to make college more affordable for students.

In addition to textbook affordability, YSU has taken initiative to make college more affordable by doing things such as lowering the required credit hours for most majors, increasing the bulk rate from 16 to 18 credit hours and adding the Penguin Jumpstart program, in which incoming freshmen take six credit hours during the summer at a lower rate.

At the board meeting, Tressel said the report will serve as a learning tool, but does not prompt a need for redirection.

“We are in a good place, and we can only get better from here,” Tressel said.