As Youngstown State University expands and changes its look, one building defies age and remains the same.

Jones Hall recently finished a renovation project that maintains the building’s original look, which led to it receiving a preservation award from the Mahoning Valley Historical Society.

The building, located on the corner of Wick and Lincoln avenues, was restored by replacing the roof, updating the gutters, downspouts and roof flashings. The slate used on the roof was the same style of slate used on the original roof.

The Director of Planning and Construction at YSU, Rich White, said actual construction work on the building lasted a little over five months.

The cost for the project was $930,000; a price that White said was a bit high but completely worth it.

White said funding for the project came from $10.5 million that YSU receives every two years from state capital.

The External Relations Manager for the Historical Society, Leann Rich, said the building was selected for a preservation award because the project did a great job at recreating the original look and that the commitment and attention to detail where reason enough. 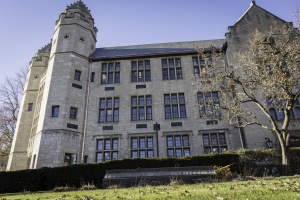 “After we put so much money into the renovation, I thought that this was the perfect contest for Jones Hall,” McFadden said.

There were three other revitalization award recipients including the Central YMCA in downtown Youngstown, the three connected statues atop the Mahoning County Courthouse and a 116-year-old home on Elm Street in Youngstown.

Rich said the difficulties that may come with preserving the look of a building come by way of cost.

White agreed, saying it’s generally more difficult to maintain the original look of a building than changing its appearance.

“It’s difficult to preserve a look just because of what’s involved,” White said. “All the flashings are copper and they have to be put together a certain way so it’s usually easier to just build something new.”

So what’s the reason for the added effort to restore Jones Hall? White accredits the building’s iconic value.

“It’s the most identifiable and one of the earliest buildings on campus,” White said.

Jones Hall hasn’t held any classes in many years but McFadden said there was a time when nearly all classes were in the building.

According to a Jambar article from 1978, Jones Hall was constructed in 1931 and was the first permanent building at YSU.

The building’s original name was Main Hall but in 1966, was changed to Jones Hall in honor of YSU’s first president Howard W. Jones who served as president from 1935-1966 and passed away in 1982.