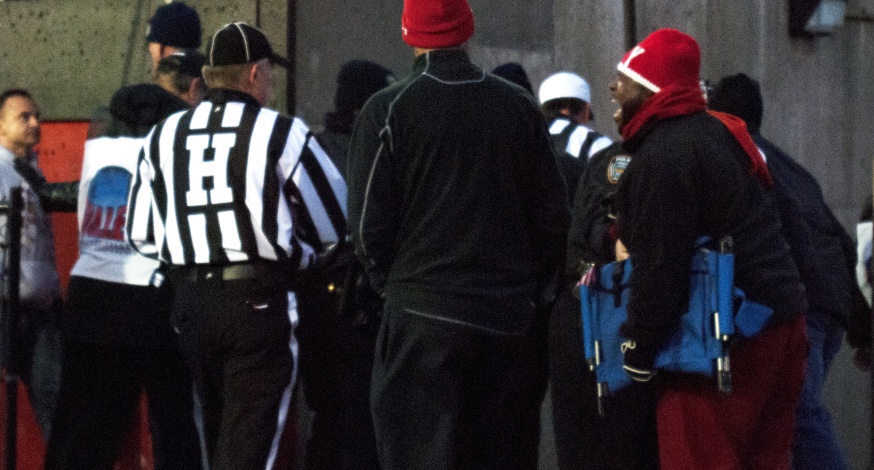 As Saturday’s game between the Youngstown State University football team and North Dakota State drew to a close, the teams walked off the field and the fans voiced their displeasure with the officials after YSU’s 27-24 loss.

On field level, fans could be heard saying “you screwed us”, “this was our season” and “these refs should be suspended.”

The YSU had a 24-20 with less than one minute to play. Facing third down and three, NDSU quarterback Easton Stick had the ball bounce off his hands after his center snapped the ball before he was ready.

He dropped back to pass and saw the YSU pass rush closing in on him, and he frantically threw the ball down the field. YSU defensive back Kenneth Durden broke up the pass, or so it seemed. The refs called Durden for pass interference and gave the Bison another chance to take the lead at the YSU 6-yard line.

Two plays later, Stick ran for a four-yard touchdown, and in an instant, YSU’s playoff hopes came crashing down. NDSU (8-2, 6-1in the Missouri Valley Football Conference) took a 27-24 lead with 35 seconds left in the game.

“No they didn’t give me an explanation on anything. There is no explanation,” Pelini said.

The Penguins began their drive at their own 30-yard line, and just as the YSU faithful thought the referees had done enough, Pelini was flagged for unsportsmanlike conduct pushing the Penguins back to their own 15-yard line. Two incomplete passes and a NDSU sack later, YSU’s bench was flagged for unsportsmanlike conduct and YSU was unable to drive down the field to attempt a game-tying field goal.

YSU’s offense struggled in the fourth quarter, going three and out on three of the team’s four possessions.

“We needed to get some first downs and weren’t able to do it,” Pelini said.

YSU (5-5, 3-4 in the Missouri Valley Football Conference) had chances to pull ahead and put the game out of reach. Quarterbacks Hunter Wells and Ricky Davis missed throws done the field, receivers dropped passes and when the Penguins were in position to score, penalties would push YSU out of field goal range.

“I thought we did some good things. I thought the design was good on some plays,” Pelini said. “We left some plays out there that hurt us — in the football game. I think we missed a couple throws here and there that may have changed the outcome of the game. It’s too bad. I’m proud of our team. They played hard, they fought hard, it just didn’t happen. They made one more played than we did.”