Elms Ballroom was a staple for live music in Youngstown 50 years ago. Local and national touring acts alike frequented the venue.

Where Elms once stood, Kilcawley Center now stands. Elms is one of many recovered stories in the book, “Lost Youngstown,” by Sean Posey released Monday. 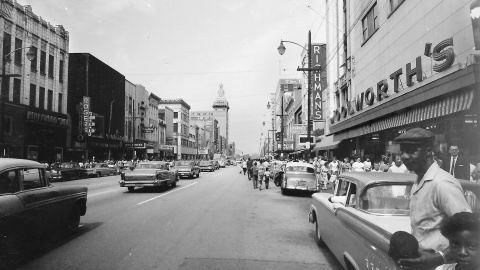 “For a buck or two you could go [to Elms] and see Jackie Wilson and Tina Turner,” Posey said. “And at the time, it was one of the big university attractions.”

“Lost Youngstown” is the latest in a series of titles published by The History Press, an affiliate of Arcadia Publishing. The series goes city by city and recovers stories of lost community staples — be it industry, theaters, diners — and retells their story through oral and archival history.

Posey is a freelancing writer and photojournalist, whose prior work has included the history of Youngstown, worked on “Lost Youngstown” from July 2014 to October 2015.

“I think it came together rather well,” Posey said. “At the outset, I had some archived work on Youngstown already on hand. I tried to keep this as tight and cohesive as possible.”

Posey said that there is history in the book that is well known, but there will be some surprises and little known stories as well.

“I had a good grasp of the history beforehand,” Posey said.

Prior to his work on “Lost Youngstown,” Posey had published articles on the subject of Youngstown’s history.

Previous iterations in the Lost series include “Lost Akron,” “Lost Cleveland” and “Lost Toledo.” There are currently 51 total titles in the series.

A story that stuck with Posey is Youngstown’s, now demolished, Paramount Theater.

“It’s difficult to visualize from the outside,” Posey said. “It was the first of the real proper dinner theaters in Youngstown.”

Posey had the opportunity to go inside the Paramount and shoot photos before it was demolished. He said that the majority of photos that he had to shoot were used for before-and-after comparisons of lost places.

Posey said that he could not disclose too much information, but he is working on another book related to Mahoning Valley history.

Posey will be selling and signing copies of “Lost Youngstown” at Barnes & Noble Booksellers in Boardman, 381 Boardman Poland Rd., on April 16 from 1 to 3 p.m.

More information about “Lost Youngstown” is available at www.lostyoungstown.com.