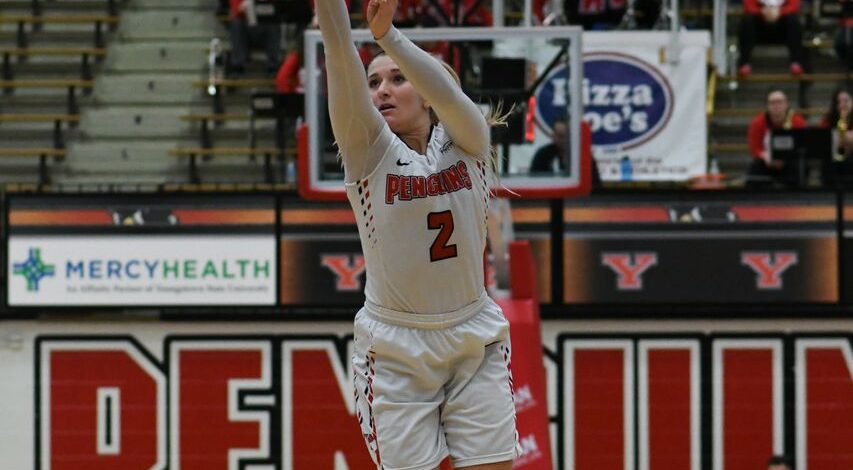 It was with five minutes remaining in the fourth quarter that Smolinksi hit her sixth 3-pointer of the game, her 210th career three, which put here in first place in YSU history for made 3-pointers.

“Mentally, sometimes, I just overthink a lot. Everyone knows that,” Smolinski said. “Mary [Dunn] is always the first one to come up to me and jump on me. She said, “Do you hear Nikki Arbanas up there?” I said, “Mary we are playing the game, we just need to win first.”

Smolinski described that moment after the shot as a special moment.

“I’ll never forget that,” she said.

Beside her record-setting day, the Penguins (12-3, 4-0 Horizon League) struggled to start the day and it didn’t look good to start.

YSU didn’t score until a Dunn layup with 3:59 left in the first quarter. Despite that struggle, YSU trailed just 12-11 to the Jaguars after 10 minutes of play.

“It was a big win for the team,” YSU Head Coach John Barnes said. “IUPUI is a very good team and well coached. They will be fighting for a league championship. To be able to play at home in front of a great crowd. I was very thankful for the crowd that showed up and they were loud down the stretch.”

Smolinski wasn’t the only one with a little history on their side. Coach John Barnes hit his 250th career win and earned win No. 94 at YSU to put him into sole possession of second place ahead of Joyce Ramsey and behind only Ed DiGregorio at 320.

“I thought defensively, we played really tough,” Barnes said on adjustments. “I was happy that we weren’t down by more. We had some shots that didn’t go in. We didn’t change up a whole lot. The biggest issue was getting into foul trouble. Both teams had a ton of foul trouble in the first half. Mary, Sarah Cash and Amara [Chikwe] all had two. That’s all of our size.”

Beside Smolinski, many others had great games. Cash finished with 13 points on 5 of 7 shooting and three assists. Melinda Trimmer had eight assists and six rebounds. Trimmer now has a 4.93 assist-to-turnover ratio on the season.

“We talked since summer, when the team got here, about being tough and not worrying about the things that are going wrong or getting too high on the good end. We are trying to stay level-headed no matter what is going on,” Barnes said.

On the defensive side, YSU was good yet again, especially in the post. Against the University of Illinois-Chicago, the Penguins held Brittany Byrd to zero points and then held Macee Williams to just nine points for IUPUI (8-7, 2-2 HL). Williams didn’t have field goal until the fourth quarter.

“They are doing a great job. They’re battling extremely hard,” Barnes said on his team’s post defense. “Sometimes you don’t realize the guards are on the weak side having to be in and out. They could be guarding really good players but they gotta help with any lobs or gaps. Amara, Sarah and Mary are doing a great job but the guard are there to back them up .It’s definitely a team effort.”