Reagle oversees the services and strategies for improving student retention and graduation.

Reagle was hired in May 2015 after interviewing for another position at YSU. He accepted his current position, but it was the first time that he had accepted a job where he wasn’t involved in housing since he was a junior in college. 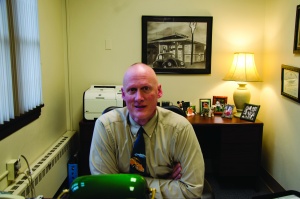 He was approached by Western Kentucky to fill their vacancy in November. The position allows Reagle to work back in housing, where he had worked for 14 years at Eastern Kentucky University prior to coming to YSU.

“To be able to go back to a job [that involves your main skill set] is an opportunity … even though this has been a great experience, especially when it falls into your lap. You just know,” he said.

Reagle said he realized how important family is after the passing of his father in the fall, and the job opportunity at Western Kentucky would allow him to relocate closer to home.

“The professional position was a great opportunity. Moving back to Kentucky would bring us closer to family,” Reagle said. “I lost my dad back in September and when things like that happen you begin to look at how important family is.

“We’re about seven hours from my wife’s parents and this move would put us about two hours away. Put all these things together and it’s sort of a no brainer, even though we’ve grown to love this campus and this place.”

“They’re going to invest $120 million into their university housing system. They’re hiring this person to lead this process for the next 10 years as they’re doing this work,” Reagle said.

Ron Cole, YSU’s public information officer, said Reagle has been in contact with YSU Provost Martin Abraham for “at least a couple weeks” in regards to leaving YSU.

Reagle’s last day at YSU will be March 3. Abraham said he considers Reagle’s departure date as a deadline to fill the position.

Abraham said he is still working to find an interim replacement for Reagle; the plan is to have the replacement selected before he leaves. Abraham said he could not give a definitive answer on the frontrunner for the interim position, but said he may have someone in mind already.

Abraham said he is planning to conduct a national search to replace Reagle, but no timetable has been set to find a permanent replacement.