Youngstown State University’s telecommunication studies are bringing back the past through radio. Auditions were held for the department’s live radio play, The Good Humor Radio Hour on March 12 and 13.

Fred Owens, a professor in communications at YSU, said this type of radio entertainment has been going on since the 1930s. He said people didn’t watch their televisions and listened to radio instead during the 1940s and 1950s.

“On the radio was a great amount of drama and comedy,” Owens said. “Television hit in the 50s, then radio stopped doing this kind of programming.”

Owens said in England and Ireland audio drama was still being produced and hosted on the air. He said a number of producing companies in the United States started as community theater, except with audio.

Owens said old-time broadcasters, people in the community and YSU students were cast in the show. He said this has taken some time so the interest would come back. 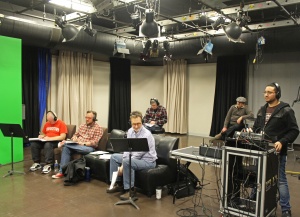 “Even though there are lots of opportunities for on camera work and on stage work, there are even more for audio actors,” Owens said.

Owens said students at YSU want to broaden their range by having more skills, so this gives them a chance to do so. He said this type of production does not require them to memorize the script and look a certain way. He said they just have to sound a certain way.

“It’s all theater of the mind,” Owens said. “It takes place in the minds of the listeners, so that means it’s a really simple way to do something that’s really high end.”

“There’s certainly a need for voice actors,” Hill said. “As animation grows, television commercials and things like that continue to use voice-over work.”

Hill said he enjoys bringing in people from the community for the show. He said he thinks this pushes everyone, and when student performers need to work with community performers, it raises everyone’s bar.

“Whenever there’s a project like this going on, jump in,” Hill said. “Don’t be afraid, don’t worry about what you know or what you think you know, or what you don’t know, just try it.”

Hill said if someone wants to do voice-over work, he recommends they learn to manipulate their voice. He said what is going to help people get cast in this project is versatility.

Naihomy Lebron, a participant in the auditions for the show, said she has always been interested in the arts. She said she would like to be an actress someday and was invited by her brother, who is in charge of the sound for the show.

Lebron said some advice she would give to someone who wants to go into this line of work is to prepare themselves mentally and to not be afraid.