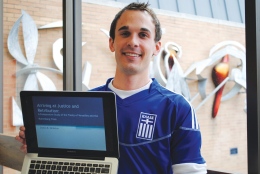 Justin McIntyre shows off his award winning research endeavor, “Arriving at Justice and Retribution: A Comparative Study of the Treaty of Versailles and the Nuremberg Trials.” McIntyre won the award for best overall undergraduate project at QUEST. Photo by Jordan D. Uhl/The Jambar.

His project, “Arriving at Justice and Retribution: A Comparative Study of the Treaty of Versailles and the Nuremberg Trials,” won the grand prize of a $1,000 scholarship, funded by the YSU Foundation.

McIntyre, who is double majoring in history and political science, and about 320 other students and faculty members presented research at the event, held on Tuesday at Youngstown State University.

QUEST, which is held annually, allows members of the YSU community to present their research. Judges evaluate the presentations and award cash prizes.

This was McIntyre’s second time competing in QUEST. His first time was as a sophomore, when he presented under YSU’s honors program. This year, he competed as a College of Liberal Arts and Social Sciences undergraduate student.

After presenting at QUEST, McIntyre said he felt confident about his project and was satisfied with his effort.

“Because it was a capstone project that I worked on for nearly an entire semester, I am very familiar with the material, and I believe that this came through in my presentation,” McIntyre said.

McIntyre said he enjoyed this year more because he was within his own field.

“I feel honored. I put a lot of work into my research for the project. It actually took place last semester, so it’s turned into a yearlong thing, and it’s

really fulfilling that my work [has] paid off,” McIntyre said.

McIntyre was not the only one to win an award at QUEST.

Approximately 170 projects were presented, and $2,900 in scholarships was awarded.

The largest awards were for the best undergraduate and graduate projects, which gave out $1,000 and $500, respectively. Additionally, 14 projects — two selected from each of YSU’s seven colleges — received $100.

“Everyone who submitted a project to QUEST should be very proud of their accomplishment,” said Jeffrey Coldren, QUEST director. “This year, I had several judges tell me how impressed they were with the quality of the projects and the presentations.”

QUEST had an 11 percent increase in student participants from last year, he said.

Even so, Coldren said he would like to “get more students and faculty involved” next year.