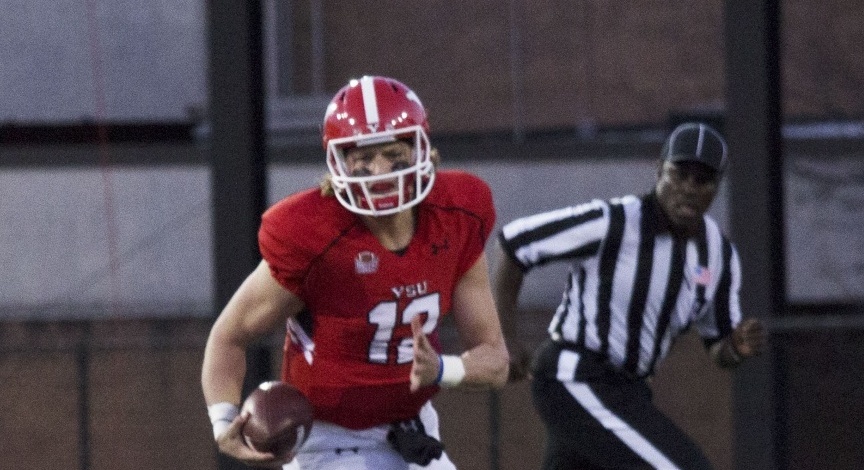 On Friday night, the Youngstown State University football team put the pads on and took the field at Stambaugh Stadium for the annual Red and White spring game.

Sure, it was a scrimmage, and the outcome of the game doesn’t mean anything, but the production from the players is going to have a real impact on who gets playing time during the 2016-17 season, specifically for the starting quarterback.

“I think all the quarterbacks had a good spring. We were playing a lot of different receivers and people, and we were moving some guys around,” YSU head coach Bo Pelini said. “That’s not always the best-case scenario for a quarterback, but I thought through the spring we saw some guys getting better. I think the competition will go right up until the week before the first game.”

All four of YSU’s quarterbacks played in the game, and with the quarterback position still undecided, Pelini and the coaching staff wanted to make sure everyone got a shot to take snaps with multiple members of the offense.

“Tonight we mixed and matched and made sure everybody played. I thought overall we had a good spring,” Pelini said. “We identified some things. I think we made progress in some areas and identified some areas we need to make progress. We have 29 more practices until we play a game for real.

“We’ll have some guys coming in, and we’ll be getting some guys back healthy. Like I said to the team, now we go into the next phase of the offseason. We made some progress, but we have a long way to go before we’re ready to take the field.”

Backup quarterback Ricky Davis took a majority of the snaps for the Red team. Davis threw the game-winning touchdown to Isiah Scott. With 3:50 left in the scrimmage, Davis found Scott on a deep pass down the right sideline for a 67-yard touchdown pass.

“Me and [Scott] worked all offseason on timing,” Davis said. “I saw him manned up, one-on-one, over there and had a great matchup. Took a shot and ended up getting into the end zone, and it’s an exciting moment for the red squad tonight.”

Incumbent starting quarterback Hunter Wells completed his own deep pass to Scott. Wells found Scott for a 32-yard gain down to the one-yard line. But on the next play, a fumbled handoff was recovered at the four-yard line.

Wells came back in the game in the Red team’s final possession, but the offense couldn’t get anything going before the game ended.

Davis said the annual spring game is important for quarterbacks because it is the closest thing to a real football game.

“We don’t get a lot of scrimmage time, as much as we want to, but any time you go out here and the quarterbacks are live — that’s something we’re not used to,” Davis said. “Any time you can compete and show what you can do, that’s huge for the competition.”

One part of the team that will need to improve is the offensive line. Wells, Davis and Trent Hosick, the newest quarterback from Western Arizona College, all had little time in the pocket. All three had to deal with pressure from both YSU defensive lines. Davis said the offensive line has room to improve, but the whole team has to get better.

“Our -O-line getting healthy is a big thing same with the receivers. We do have one [junior college] transfer coming in,” Davis said. “Hopefully, he can make an immediate impact. But mostly overall, mental mistakes, I would say that is the biggest thing.”

The Red and White game consists of members of the roster that are currently enrolled at YSU. Pelini said other players will contribute to the team next season and expects the players to improve during the summer.