Junior football player Joe Craycraft is lined up to take over the reigns as quarterback this upcoming season for the Youngstown State Penguins, whatever that season may look like. With former quarterback Nathan Mays graduating this past school year, Craycraft is prepared to take on the role both on and off the field.

This Marion, Ohio native saw limited action in his first two years but appeared in 11 out of 12 games last season as a sophomore, starting in three. He is building off last season’s experience, where he completed 66 of 27 passes for 893 yards with eight touchdowns while rushing for 143 yards on 59 carries with three scores.

Craycraft is expected to lead the charge for the Penguins on offense this season. But, whether he’s starting or backing up, Craycraft said he intends to prepare for the season the same way.

“Even if you’re the backup, third string, or whatever it is, you need to prepare like you’re the guy,” he said.

This season, however, Craycraft wants to take on a greater leadership role now that he is one of the veterans on the team. Not only through his actions, but also with his voice.

“This year I’m making it a point to myself to try and be more of a vocal leader,” Craycraft said.

Like with many of the fall sports, COVID-19 will have an effect on the football team this season. The Missouri Valley Football Conference has cancelled conference play until the spring where there will be a full 8-game spring schedule with fall competition still up in the air. However, Craycraft does not want to think too far ahead on whether or not there will be games played this fall or even in the spring.

“Our job is just to be ready,” he said. “We just got to look at it one day at a time. You come everyday and live in the present.” 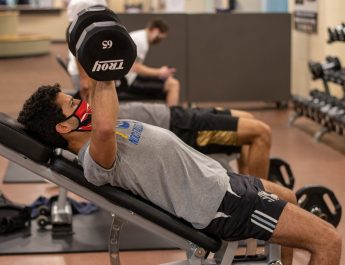