“Person with a firearm on campus. I hope it’s not one of the students I caught cheating on their assignments yesterday LOL I’d hate to think getting caught was one stressor too many,” said Laura Goist, Spanish studies coordinator in the department of world languages and cultures at Youngstown State University in a Facebook post on Dec. 3. 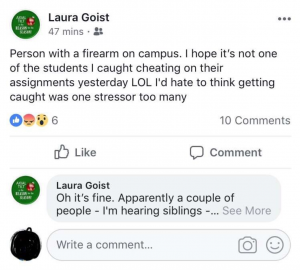 This was a day that induced panic and stress for many students and staff alike at the university when a Penguin Alert was issued stating that there was a potential gunman on campus.

Law enforcement swung into action, faculty and staff followed ALICE training protocol or did what they believed to be the best safety precautions, and students prepared for the worst case scenario.

In the week following the incident, The Jambar received three messages from students concerned and disheartened at the Facebook post Goist published during the lockdown.

Danyelle Weidow, a junior double majoring in psychology and criminal justice, said she believes professors should display professionalism and sensitivity during challenging circumstances.

In her opinion, a professor discussing information about students “that should be confidential” is unethical.

“What if a student would have been shot,” Weidow said. “This teacher thinks it’s a joke.”

She expressed the lack of motivation to attend Goist’s class in the final weeks of the fall 2018 semester due to her “disgust” for what she called a “lack of humanity” for serious issues.

Another student of Goist spoke to “The Jambar” on the condition of anonymity about the Facebook post.

“She was completely unprofessional, and it reflects very poorly on her character, as well as the level of professionalism expected from professors of such a well-known university,” the student said.

Stress looks different on everyone, and Goist said her stress caused her to resort to dark humor during the lockdown.

“I obviously had some concerns for the campus at that moment because nobody knew what was going on,” she said. “But it was very facetious since obviously, the chances of it being one of my students was exceedingly slim.”

Jessica Johnson, a Badger High School student enrolled in the College Credit Plus Program at YSU, said she thought the post was out of line.

“I just thought it was crazy because during that time we were supposed to be locking down and this teacher should’ve been concerned about her students, but instead she made a post on Facebook,” she said.

In Johnson’s opinion, getting caught cheating in class could possibly be a “trigger” for a student and someone could have actually gotten hurt.

“[Goist] just didn’t care and used it as a joke for likes on Facebook, I guess,” she said.

Johnson said she hopes someone in the university’s administration notices her concerns and puts a disciplinary plan into action.

John Sarkissian, chair of the Department of World Languages and Cultures spoke with Goist about the Facebook post and how it may have concerned students.

“I think that people respond to stressful situations in different ways, and one of the ways that some people relief tension is through humor or attempts at humor,” he said. “As far as I understand it, that post was made from the language lab where [Goist] had secured the room, and I think that in the tension of the moment she relieved some of her anxiety by making that post which was an attempt at humor.”

Sarkissian said he thinks Goist would agree with him that although the purpose in posting it was “benign,” maybe it wasn’t the best idea.

According to Sarkissian, at the time of the interview with The Jambar, he’d only heard secondhand from The Jambar that the post upset students.

“No one has filed any kind of a complaint or indicated any concern to me,” he said. “It would be the equivalent of someone saying ‘I heard on the elevator somebody’s not happy.’ So, from my point of view there’s nothing to even look into.”

Sarkissian said if a student files a complaint with the department about something a professor says or posts that concerns or upsets them, the department would handle those complaints on a case-by-case basis and there is no overall protocol.

At the time The Jambar spoke with Sarkissian, he said there were no plans for disciplinary action.