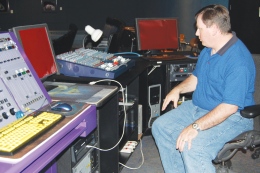 The show, “Cosmic Castaways,” premieres May 11.

Feldmeier, an assistant professor of physics and astronomy, began production in January 2011. He, along with collaborators Christopher Mihos and Patrick Durrell, researched intracluster light, the light emitted from stars between galaxies.

These stars are difficult to find, and their existence was suggested only in 1951, Feldmeier said.

“Cosmic Castaways” seeks to explain the origins and science surrounding these stars through an illustrative planetarium show.

“It is kind of cool to see some of your science up in the big dome,”

Feldmeier said, referring to the planetarium in Ward Beecher Hall.

YSU typically purchases only one or two new shows a year.

Feldmeier’s goal has been to solve this problem by producing an inexpensive — but quality — show to release to the public.

The money is from a National Science Foundation grant. Feldmeier wrote the grant three years ago and received funding with two requirements attached.

The first states that a portion of it must be used for scientific use, such as research. The second requires the creation of a broader impact on the community. The $20,000 Feldmeier set aside for the project is fulfilling the latter goal.

The NSF grants just a quarter of around 40,000 requests for funding every year.

Despite the lower-than-average budget, Annie Wilson, a biology major and planetarium employee, said the production is well under it.

Wilson attributes part of the low cost of production to Mihos’ supply of simulations and the use of Blender, a free graphics program.

Blender is not user-friendly, Wilson said, but she has spent the last 15 months mastering it.

Mihos, an astronomy professor at Case Western Reserve University, provided simulations of colliding galaxies for Spivey and Wilson to incorporate into the show.

Feldmeier said this project is a scientific experiment in itself. It is essentially the first production of its kind, and it has been a nationwide collaboration.

Pamela Gay, an astronomer and professor at Southern Illinois University Edwardsville, is an expert in new media and the voice of the 20-minute “Cosmic Castaways.” Most of the contact between Gay and the rest of the production team has been through phone and email.

Feldmeier said the entire production team has been in the same room just a handful of times.

One of those occasions was among Spivey’s favorite moments of production: playing the soundtrack for Gay and Mihos for the first time.

“I’m never going to get rich doing this job,” Spivey said. “But they pay me to run my mouth and play with cool toys, and you can’t beat that.”

After the release of “Cosmic Castaways,” Feldmeier and his team will take critiques, release the show to other planetariums for critiquing and continue the editing process.

Feldmeier said he hopes to finish perfecting “Cosmic Castaways” by winter. He then wants to release the video free to all planetariums and on YouTube.

Feldmeier added that this project will be the first of many, and he looks forward to fruition of the team’s hard work.