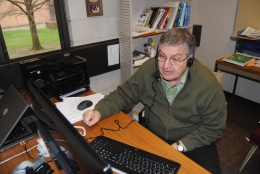 Joseph Lyons, an assistant professor in health professions at YSU, works with voice recognition software in his office. He’s studying the use of the software and how age, gender and ethnicity play a role in voice recognition. Photo by Marissa McIntyre/The Jambar.

Music and medicine have fostered an atypical relationship at Youngstown State University that could benefit local hospitals.

Joseph Lyons, an assistant professor in health professions at YSU, has teamed up with sophomore music major Chris Palmer to conduct research on voice recognition software used in the medical field.

The two are conducting the study to see how age, gender and ethnicity can affect the accuracy and acceptance of modern voice recognition software, which is used sparingly in local hospitals.

Lyons said that radiology, being one of the first methods to diagnose injuries, has always been ahead of the technology curve.

“If someone wrecks their motorcycle, they’re under a time crunch. They need to get the patient’s information as soon as possible,” Lyons said.

The software has been used in the radiology departments at St. Elizabeth and St. Joseph health centers for a decade, but Lyons and Palmer want to know why the software, which they say has made significant gains in accuracy, is not used more often.

Linda McCaslin, a Picture Archiving Communication System — or PACS — administrator at St. Elizabeth, said the software prevents errors and expedites note taking, but widespread use has been limited because some doctors prefer not to use it, while others are concerned about accuracy.

She added that accuracy is a concern with any form of technology.

Still, nothing is perfect.

McCaslin said the position of the microphone, background noise and accents are among some limitations that prevent absolute accuracy.

And inaccurate information can have dire consequences when it comes to medical treatment.

“I don’t want to take my patient to surgery on a problem that isn’t there,” McCaslin said.

The software detects errors and prevents problematic notes from being filed. Doctors can also program the software to recognize common mistakes.

“Any failsafe you can have is there to prevent problems before the report is sent out,” McCaslin said.

Brad Sloan, St. Joseph’s PACS administrator, said he would like to see voice recognition incorporated into all areas of the hospital.

Lyons met with representatives from area hospitals to discuss his research.

Lyons and Palmer are recruiting people of various ages, ethnic backgrounds and genders to participate in the study.

The older generation, Lyons postulates, may be less receptive to voice recognition. He also said the doctor’s ethnic background could be a factor.

“If someone isn’t as familiar with it, they’re not going to be as accepting to it,” McCaslin said.

“That’s where our research comes in,” Lyons said. “I definitely think that age could be a factor.”

Lyons said they are on target with the hospitals and look forward to conducting more research.

Participants in Lyons’ research will take part in a two-day session.

Palmer believes that once people become more knowledgeable, they will be more likely to implement it.

“It takes some getting used to,” Palmer said. “But once you do and you use it, you’re going to wonder why you didn’t use it before.”