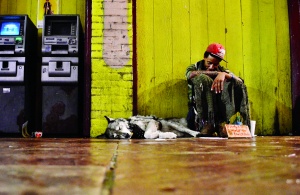 Dana Davis, assistant professor in the department of social work at Youngstown State University, has been helping the chronically homeless in Pittsburgh for nine years and plans on expanding her efforts to the Mahoning Valley.

She founded The Open Door, a non-profit that operates a 15-unit apartment building in Pittsburgh offering safe and affordable housing for homeless people living with HIV and other conditions that make them ineligible for traditional housing.

“We at The Open Door know that they might have substance use disorders, mental health disorder, they might have HIV or they might have all three and a lot more, but that does not define who they are,” Davis said. “They can still be a great person, a good parent, a good employee. They can achieve lots of things in their lives and those problems don’t define them.”

According to Davis, the program improves the lifestyle of many individuals, and when they move to independent housing, they are more likely to be successful.

She said she was inspired to found The Open Door after noticing that people receiving treatment for HIV would still die because they were homeless and had underlying mental health or substance abuse problems.

AIDS United, a funder of The Open Door, recognized it as an innovative program and wanted to partner with them to support similar programs. The Open Door accepted submissions last year, and two agencies — including one in the Mahoning Valley — were awarded money and consultation services to start new housing programs.

Davis said many people think The Open Door provides free apartments to people with HIV. Most clients have multiple chronic health conditions, so they receive social security, disability checks, SSI or SSTI, especially if they have substance abuse or mental disorders, and others work part time for their housing.

The Open Door helps clients pay their bills. Many clients have difficulty setting aside enough money to pay rent when they are relying on a fixed income, so the nonprofit receives their income, directs the appropriate amount of money toward bills and then gives the client the rest. Davis said this has taught people to be more responsible with their income and prevent future homelessness.

Davis said the way society treats people who have drug, health and mental problems is largely to blame for the amount of people who are homeless and unable to get help.

“The thing is, in our country they do not do a very good job of engaging people with all these problems early on,” Davis said. “You have to decide to become abstinent [of drugs and alcohol] — you already have to be seeing a mental health care provider [to take care of] your mental health issue before they can do anything for you.”

She said when people achieve those goals they are usually significantly older and have already dealt with consequences related to their addictions.

“We at Open Door hope we can engage them as early as possible when they’re having that problem because we recognize that they can achieve really healthy life goals,” Davis said.

Open Door doesn’t force its clients to enroll in rehab services. Davis said almost all of their clients are managing their HIV, but some of them aren’t ready to work on substance abuse or mental health problems yet.

She voiced concern about the unfair treatment her clients and others like them receive from the general public.

“I think that society does judge certain populations of people, and certainly people who abuse substances are pretty harshly judged in the United States,” Davis said. “[There’s] a lot of bias and prejudice and discrimination.”

She said this prejudice and discrimination exists even in the health care community.

“The health care providers are supposed to be on peoples’ sides, and they’re supposed to understand that abusing substances is a medical problem,” Davis said. “It’s a chronic health problem. It’s not just going to go away by somebody going to a 30 day rehab or detox program. These are lifelong conditions that need support on a chronic basis.”

While she doesn’t handle day-to-day operations anymore, as president of the board she is still involved in financial issues, grant writing and supervision.

Davis said she wants to reduce the stigma suggesting that homeless people don’t want to get help or be successful in life.

“Our hope is that traditional health care providers can see that if you let clients decide what their goals are, that they will almost never be non-compliant with their health care because their goals count for them,” Davis said. “When you let them work on the goals that they’re interested in, then they’re really going to be quite successful, regardless of what other demands they had in their life.”