With the new school year underway, students are not only dealing with the start of new classes and getting out of their summer mindset, but also dealing with the obstacles of construction on campus. 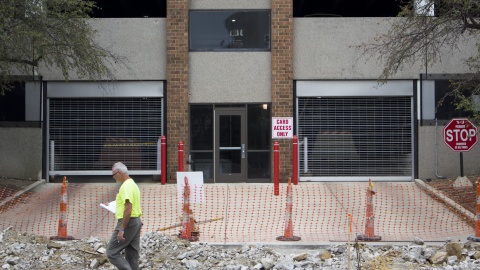 The construction on campus has Lincoln Avenue blocked off completely and parts of Wick Avenue will be joining it. All Youngstown State University students are adjusting to the change.

Danny O’Connell, the director of Support Services at YSU, said changing the routine of students is a high priority.

“We improve habits, and need educate them that this is the better way to go,” O’Connell said. “Students will cross 20 feet from sidewalk to sidewalk instead of 40 feet while worrying about a car coming when crossing.”

O’Connell has been working with Ron Cole, YSU’s public information officer, to educate the students and staff. They have made flyers and sent out emails over the summer to inform and prepare those coming to YSU campus.

O’Connell said the construction is not affecting the number of spaces available for parking, but just one entrance to the Wick Ave. parking deck as of now.

“Lincoln Avenue is a pedestrian safety project, and there is something special in my mind happening here at the university,” he said. “I think a lot of it is since President Tressel came on board.”

The project is being done by the city and through the federal government due to a grant given by Rep. Tim Ryan for the concern of YSU students’ and staff’s safety. They are going to install more street lights around campus, tighten the roads for crossing and pave the roads as well.

O’ Connell’s advice for students is to leave early. For those coming to campus around 10 or 11a.m., getting to campus ahead of time is the smartest decision.

The construction not only has some effect on the students’ schedules, but it will make an impact on public events at YSU. Football is one of the main events during the fall semester and the big question is, will the fall construction affect athletes and those coming to cheer on our Penguins?

Trevor Parks, one of the Sports Information directors, said that the coaches, athletes and fans are all staying positive and keeping their eyes towards the future.

“Our coaches and athletes have loved what they’ve seen so far and at the end, we’re looking at the big picture,” Parks said.

Parks explained that 90 percent of the athletes live on campus and only 10 to 15 drive, so the construction does not negatively affect the players.

Senior Ricky Davis, quarterback for YSU, said that the construction doesn’t affect the athletes much because most of them are not commuter students.

“From an athlete perspective, construction doesn’t affect the majority of our student athletes getting to practice because most of us live on campus, so walking is accessible,” Davis said.

For the games, many parking spots will be available to the public, mainly on the West Side of campus. A few parking lots near McDonalds and Taco Bell are available for parking during the games, including M27, F2 and M24.

From a student aspect of having multiple classes every day, Davis disagreed with the construction and their timing.

Davis said that he thinks that the construction is an unneeded headache that could have waited until next summer when students and faculty were away from campus.

“The construction affects parking, getting to class on time and ultimately affects a smooth schedule for a student,” Davis said.

Some students may have concern with the construction but staff members like Parks are excited for the outcome.

“We are looking forward to getting it done … now,” Parks said. “It’s there, and everyone just has to deal with it.”