Social media apps and websites may have access to private information on personal devices.

With cell phones becoming increasingly advanced and new social media applications such as Facebook and Snapchat on the rise, users’ privacy is at risk.

Kati Hartwig, the social media and web manager for Youngstown State University, said social media plays a watchdog role in the world today and is nearly essential for communication.

“It is essential for higher education and allows students to connect with each other, as well as alumni,” Hartwig said. “Basically, when people talk about apps like Facebook obtaining information about its users, the topic of Big Brother comes up. A lot of your information is public anyway. Sites use this [information] to help adjust advertisements.” 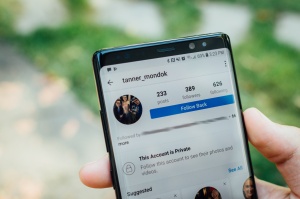 According to a 2014 report by Fox 29 News, social media apps like Facebook Messenger can access contacts, location, camera, photos and microphone if the user chooses to accept their terms and conditions through the app store.

While these social media sites are free to download, users are relinquishing a lot of their private information, Hartwig said.

“A lot of what Facebook does is analytic reporting,” Hartwig said. “This allows them to identify users’ interests, who they communicate with and tailor the content around that.”

Essentially, Facebook allows users to access their social media platform for free in exchange for a user’s private information. According to a 2013 article written by Bernard Marr, an internationally best-selling author, Facebook has massive abilities to collect, store and analyze data, which allows Facebook to sell targeted advertising.

Marr also said the social media site invested in image processing and facial recognition that essentially allows Facebook to track people. All of the research done through Facebook allows them to analyze a user’s data and sell them advertising based off location, interests and latest activity.

At the end of the article, Marr asks if users feel comfortable with Facebook having the ability to study and essentially exploit what it knows about them.

Christopher Wentz, the information security officer at YSU, said several members of the university’s IT department didn’t use the Facebook Messenger app due to privacy concerns. Wentz said people skip through terms and conditions before agreeing to applications demands, which is an issue.

“You enter into a legal agreement with the software provider when you accept the terms and conditions. As far as permissions go, you grant the site the ability to perform the actions such as accessing contacts, camera and data as outlined in the agreement,” Wentz said. “Once you hit agree, the developers can access whatever information they want.”

While social media usage continues to increase, privacy concerns are brought to light. Some people either drop their account or don’t use it at all over the issue of privacy.

Dennis Schiraldi, a communications professor at YSU, said he believes otherwise. He said he does not believe privacy to be the biggest factor in whether or not people use social media.

“I believe in social media fatigue, people becoming tired of keeping up with it [social media] or seeing people’s fantastic, fake lives is contributing to some unhappiness,” Schiraldi said. “Only a small percentage of people are not logging on or are leaving because of privacy.”

Schiraldi said some people know about the privacy concerns and use it anyway. He said others don’t know and continue to use it, unaware of what social media sites like Facebook are doing with the information.