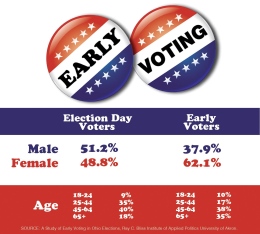 Social and economic issues aren’t the only subjects up for debate this election season.

“The Democratic Party position is that [Republicans] did it to make it more difficult to vote,” McTigue said.

He added that a disproportionately high number of early voters tend to vote Democrat, including women and lower-income voters. A study by the University of Akron showed that 62.1 percent of early voters in 2010 were women and 35 percent were more likely to have an annual income of less than $35,000.

Obama for America, the Democratic National Committee and the Ohio Democratic Party teamed up to press for more early voting opportunities. “It becomes more meaningful closer to the election in terms of people making up their mind on who they’re going to vote for,” McTigue said.

Jon Husted, Ohio’s secretary of state, gave the Democratic Party more cause for complaint on Aug. 15 when he issued a directive to Ohio’s 88 counties requiring uniform early voting hours.

“After talking with elections officials across the state, I have decided to level the playing field on voting days and hours during the absentee voting period in order to ensure that the presidential election in Ohio will be uniform, accessible for all, fair and secure,” Husted said in a prepared statement.

After consulting with elections officials across the state, Husted eliminated weekend voting hours and established 23 days, or 230 hours, of early voting.

Some county boards of elections are less than ecstatic that there will be no weekend voting this election.

The 2008 election allowed early weekend voting and early voting until the day before Election Day.

Husted fired two members of the Montgomery County election board for choosing to maintain weekend voting hours in the face of the directive. “The Democrats believe that the more people who vote, the better they do,” said William Binning, a Youngstown State University professor and chair emeritus of political science. “The Republicans believe the same thing. That is, the more people who vote, the better the Democrats do.”

Binning pointed to this belief as the stem of the issue at hand.

Mahoning County is split between two congressional districts, which could have caused issues if voting hours were not uniform.

He said he believes that because of the early and absentee voting options, it’s never been easier to vote in Ohio.

“I suppose we could send out limos and taxi cabs, but voter participation hasn’t really changed over the years,” Munroe said.

Ohio, like 32 other states, offers no-excuse early voting, and is one of the few that mails all registered voters an absentee ballot application.

This is the first year that every registered voter will be mailed an absentee ballot application.

“[It allows] them to vote from their home and turn their kitchen table into their voting booth,” said Matt McClellan, Husted’s press secretary.

McClellan said Republicans and Husted’s office believe there is ample time for voters to participate in the upcoming election.

He said the combination of early voting, the opportunity to vote no-excuse absentee and Election Day itself make voting easy.

“As a result of what we’ve done in Ohio, every voter will have the same level of access,” McClellan said.