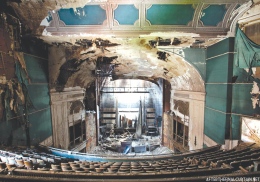 Despite efforts, The Paramount Theater on Federal Plaza was unable to survive the test of time. It has sat dormant since 1976. Photo courtesy of Matt Lambros/ afterthefinalcurtain.net.

If it weren’t for the former Liberty-Paramount Theater, Rita and Jack Russell would never have met.

At 14, Rita Russell began working at the theater as a candy counter clerk. The year was 1944, and her mother was an assistant to the manager.

“The whole lobby would be filled with people around the candy stand on Saturday and Sunday,” she said. “It’s the fondest memory I have.”

While working to pay her $90 annual tuition to Ursuline High School, she met Jack Russell who also worked at the theater.

“People would line around the block, even in the cold,” he said. “It didn’t matter.”

This month, the McDonough Museum of Art will collect similar stories through the Paramount Oral History Project. These memories will be recorded and edited by students in Youngstown State University’s telecommunications and art departments.

When the theater opened on Federal Plaza, it featured silent movies and vaudeville acts, seating up to 1,700 people.

Since the 1970s, though, the building has been left to decay.

The theater will soon be demolished, leaving only its stately terra cotta facade.

Jacob Harver, owner of the Lemon Grove Cafe, said although it would be nice, the structure cannot be saved. It’s simply not feasible.

“It is just beyond the point of saving,” he said. “The plan is to put an open-air amphitheater behind it. We really lack this in Youngstown.”

For now, many remain focused on keeping memories of the theater alive.

Multiple interviews were recorded over the weekend. Interviews will continue at the McDonough on Saturday from 11 a.m. to 4 p.m.

From Jan. 3 to Feb. 3, the museum will showcase these interviews.

“It is the past and vision for the future,” Harver said. “It’s just a shame that so many buildings downtown have been torn down. So many could have been saved.”

“The new apartments downtown, the Federal Building and the new V2 [Wine Bar Trattoria] are all part of this renaissance movement,” he said.

Rita Russell said the rise of TV and shopping malls marked the city’s downfall. She said the area used to include large department stores like Strauss’ and McKelvey’s.

“It’s kind of depressing to drive by [the theater] sometimes,” Rita Russell said. “It’s kind of like visiting an old home over time.”

Harver said the goal is to eventually put a glass atrium over the open amphitheater.

“It would be great for summer festivals and even a New Year’s Eve ball drop event,” he said.

Rita Russell added that she dreams of having downtown come alive again.

“To have the area pick up again … that would be a wish of mine,” she said.