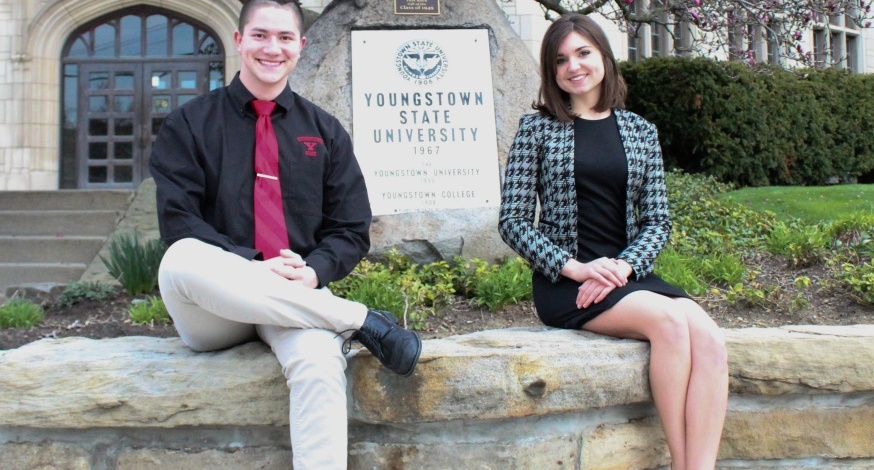 Miller-Gordon is SGA’s secretary of technology, and Gessler is the current executive vice president.

“An overarching goal we have is to make the experience at YSU the best it can possibly be for each student on campus,” Miller-Gordon said. “It sounds cheesy, but we’re trying to make it the perfect experience for students.”

Miller-Gordon and Gessler intend to improve communication both within SGA and between SGA and the student body. Miller-Gordon said this makes it easier for representatives to connect with their constituents. 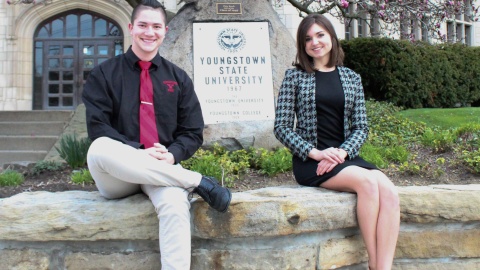 “We want to be more involved when it comes to having a meeting the reps event at the beginning of each semester, so students at each college can … know who their representatives are,” Miller-Gordon said.

Miller-Gordon said they want to tie this into Welcome Week, so first-year freshmen and students who are unfamiliar with SGA are exposed to the organization and the initiatives they implement to improve their YSU experience. He said this can help students get acquainted with SGA, so they know who to talk to when they have a problem.

“Often what’s going to shape a student’s perspective of student government is their first interaction with them, … so we’re really harnessing that energy,” Miller-Gordon said. “We want to take that and run with it.”

“We wanted to see what specifically SGA can take part of, and how we can even encourage the administration to help develop some programming,” Gessler said.

She cited the Summer Bridge Program for multicultural students offered by the Center for Student Progress and said they would like to incorporate job opportunities to help students pay for school and developing a mentorship program with alumni.

They also want to provide scholarship opportunities and develop a leadership summit.

“We’ve paired with Crystal Hawthorne. She’s the adviser for the Minority Education Association,” Gessler said. “We’re hoping to start taking a lot of steps to get everything finalized for the launch in fall.”

“Often it’s that lack of knowing what to do that detriments students the most,” he said. “Especially those that are at a disadvantage for being a minority.”

Last semester, they gave an international student an ex-officio position on the body, meaning they can partake in discussions but can’t vote. Gessler said they developed the position because of the cultural and language barriers international students have, but they worry appointing underrepresented minorities would limit their ability to run and represent SGA.

“We would much rather be proactive in our approach to doing this and not appoint them to the body, but develop programs that would encourage their representation,” Gessler said.

“Doing that does limit their opportunity to get involved, but it also restricts the rest of the body to be less diverse,” Miller-Gordon said. “We want to promote inclusion as much as possible, and we think that not awarding the seat is going to provide the greatest amount of that.”

Miller-Gordon and Gessler will also be the first administration to manage an appropriations budget to which Orr added $125,000. They said the money will be used to fund student organizations and university programs.

“[We’re] reaching out to those student organizations and campus leaders,” Miller-Gordon said. “We want to get as many students involved as possible, so those funds can reach the biggest amount of students.”

They said they want to continue successful Orr initiatives like the Mental Health Advocacy Training, and they intend to continue pursuing an on-campus food pantry. Gessler said she also intends to continue to work with Maag library to allow students to access textbooks for general education classes.

They also hope to increase involvement in SGA. While they are running unopposed, Miller-Gordon said graduating seniors — who are ineligible to run — compose a significant portion of the body this year.

Gessler said outreach plays a major part in recruiting new representatives. Orr developed a committee to be active in talking to student organizations and asking them to apply and act in the petitioning process. She’s confident those efforts will pay off in the future.

Miller-Gordon agreed and said they want to help students get past the stigma that surrounds the organization and participate.

“We are hoping to kind of bridge the gap to show the seamless transition from being a lay student to being involved in SGA,” Miller-Gordon said.

Gessler added they are student advocates who are here to work on initiatives on behalf of the students.

“We aren’t intimidating like our name,” Gessler said. “It’s very simple. We are just here to listen and act out for student’s needs.”

“We are still people,” Miller-Gordon said. “Nobody is perfect. We are all just students trying to get degrees and get into the workforce … We are students who represent students.”