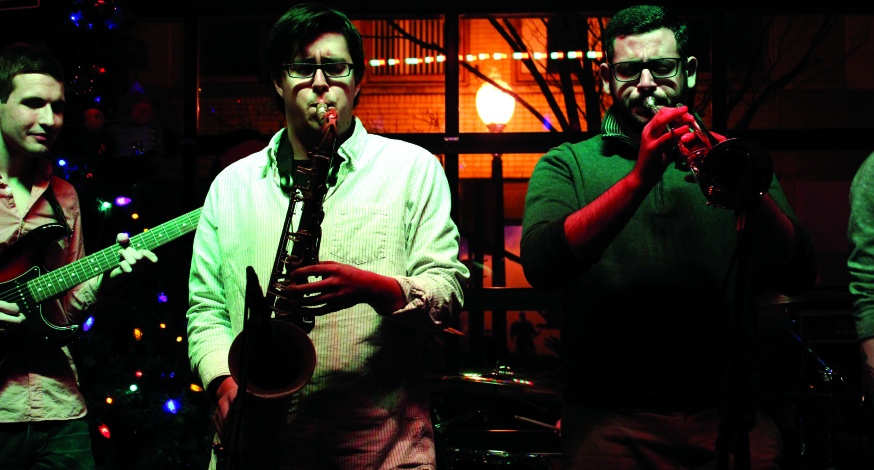 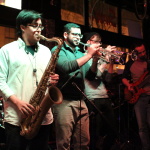 Cosmic Lemons held a release party for their latest EP, “Lift Off,” at Suzie’s Dogs & Drafts in downtown Youngstown on Saturday night.

The band played a slew of new covers and originals, as well as some fan favorites and original songs from their new EP.

Cosmic Lemons plays a fusion of jazz, funk and reggae, and they hail from Youngstown, Ohio. All members of the band are currently enrolled in Youngstown State University’s Dana School of Music, each pursuing various degrees. Their current lineup is Anthony Kunovic on guitar, Frank Toncar on bass, John Guido Vitullo on drums, Nathan Negro on percussion and keys, Michael Barkett on trumpet, Justin Randall also on trumpet and keys, Alex Miller on saxophone and Colton Randall on trombone.

“It’s our first show of the year, the release of our first recorded material and the first weekend after the spring semester started back up, so we figured we have to give it all we got in terms of high energy and musicality,” Toncar said.

The idea for Cosmic Lemons was born out of Barkett, Miller and Toncar hanging out and listening to the early 2000s ska band, Streetlight Manifesto

“We had the idea to start a band with similar instrumentation, with the initial idea of combining jazz, reggae, ska and funk. We began talking about if this could actually be feasible and had a tentative lineup by the end of the day. All the guys we came up with were very interested, and voila, Cosmic Lemons,” Toncar said.

There are five original tracks on “Lift Off.” Toncar feels the band put a lot of work into it and is confident with the product.

“Over the summer, we spent a lot of time rehearsing and learning covers, as well as trying to find our own original sound and get our own stuff mixed into the set,” he said. “We kept writing and progressing and decided we wanted to record these tracks, so we set dates in October and began recording.

“We ended up doing everything live, which was a great experience for me, and then once the semester was over, I began mixing and mastering the songs to get them sounding their best for the release,” Toncar said.

Barkett says his favorite part of being in Cosmic Lemons is the experience of performing in front of a crowd.

“It exemplifies the reason I became a music performance major. I am putting in my own time and efforts to write/arrange and play music. At the same time, it is one of the most gratifying experiences I’ve ever had. To stand on stage and watch people enjoying the music you created is the most fulfilling feeling possible in my eyes,” he said.

Toncar agrees that the audience enhances his favorite memory.

“We played a show at Suzie’s at the beginning of the 2015 fall semester with a group called 718 from New York though, and that show was really awesome,” he said. “A lot of friends came out, and it seemed like everyone had a really great time, which is certainly important to me.”

Justin Randall says Saturday night’s performance at Suzie’s was definitely one he will remember.