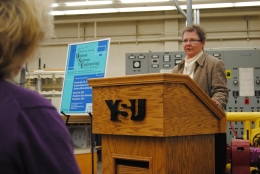 The Edward W. Powers Charitable Fund donated $100,000 to the Women in Science and Engineering Career Day at a press conference on Wednesday.

Anderson said it was important to hold the press conference there because it’s where students receive the most hands-on experience.

“This gift will enhance and expand career day and ultimately affect and inspire women in this Valley and beyond to pursue careers in science and engineering,” Anderson said during the press conference.

Anderson also announced a name change for the event. It will now be known as the Edward W. Powers Women in Science and Engineering Career Day. This year’s event will be held on March 3.

Powers couldn’t stop smiling as she presented the check in honor of her great-uncle.

“I am so thrilled,” Powers said. “He had some rough edges; he intimidated some people. So, [with] this, I get to show the other side of him, because he was a very caring man.”

Powers said her great-uncle cared immensely about education and is thrilled to have this career day in his name.

She plans to continue supporting the program.

The donation will go toward expanding career day, as well as bringing in Pamela Gay of Southern Illinois University as the event’s keynote speaker.

“Traditionally, women have been under-represented [in STEM fields],” said Diana Fagen, an associate professor of biology, during the press conference.

She added that this under-representation isn’t due to lack of education, but rather to the lack of role models to encourage women to enter these fields.

Martin Abraham, dean of STEM, said he hopes that enhancing the program will encourage high school students to attend YSU.

“It’s important to get them at as early an age as we can. As soon as we can get them on campus, and they can see what they can do, we hope it’ll encourage them,” Abraham said. “This is about role models, and that this is a reasonable career choice for them.”