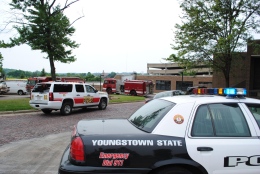 Youngstown firefighters and Valley Electrical Consolidated representatives attended to a small electrical fire in a substation underneath University Courtyard Apartments at 12:46 p.m.

A transformer blew in the substation, which maintenance workers confirmed was directly related to the outage, but they were unsure exactly how.

University officials are still unsure of the outage’s cause, however efforts to restore power are underway. As of 1:55 p.m., Kilcawley Center and Fedor Hall had seen power return.

Ron Cole, director of university communications, confirmed power had been restored to all campus buildings except for Bliss Hall at 2:30 p.m.

“We’re back to operating as usual, unless we’re notified otherwise,” Cole said.

John Hyden, executive director of facilities, said restoration attempts were made in phases.

No injuries were sustained as a result of the outage, and Courtyard Apartments remained unoccupied due to a prolonged, yet unrelated, power outage.