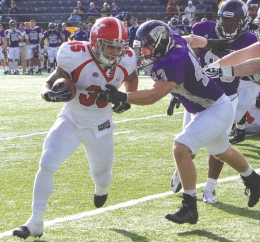 Heading into the final regular game of its 2012 season, the Youngstown State University football team will need more than a win to make the playoffs.

Running back Jamaine Cook said the Penguins will also need other teams in the Missouri Valley Football Conference to lose, but that the team has more short-term goals in mind.

“We just have to focus on being 1-0 this week,” he said. “If we have some good fortune here, then we’ll end up in the playoffs. But, basically, our coaches are stressing us to win the week.”

In the same situation heading into last season’s finale, the Penguins needed a victory against Missouri State University combined with losses by certain MVFC teams to make the playoffs.

Those specific MVFC teams lost — and so did the Penguins.

In the event of a YSU victory and a 7-4 final record, the Penguins would be on the Football Championship Subdivision playoff bubble. Head football coach Eric Wolford said another win would give his team a record worthy of making the postseason.

“If it’s meant to be, it’s meant to be,” he said. “But I do know this: Of the 10 FCS teams we’ve played, seven have been ranked in the top 25. … There aren’t other teams in our league that have had to play that many [ranked teams].”

Wolford added that the season-opening win at the University of Pittsburgh should carry some weight as well.

“Why play money games if they’re going to hold it against you?” Wolford said. “If you win one of those, it should count as two. Hopefully, that’s the way it’s viewed as.”

Although the Penguins have managed to keep their playoff hopes alive with victories in the past two weeks, tight end Will Shaw called the overall situation “frustrating.”

“It’s hard, especially when we know in our locker room that we expect a lot more out of ourselves,” he said. “We know there’s a lot more that could be put out on the field than what’s been shown recently.”