The marionette theatre also added another show at 2 p.m. after the first one was sold out.

The marionette theatre is a family business and has been in the United States since 1967. The current members are husband and father David Syrotiak, son Steven Syrotiak and wife and mother Mariana Syrotiak.

Daniel Syrotiak, managing director of the theatre and a performer, has been with the company from the beginning.

“I was about 2 years old when my dad started this whole thing, and I was always bugging him. So, he finally put me to work and I started performing,” he said.

“Pinocchio” is just one of the many shows the marionette theatre puts on. According to the Syrotiaks, they perform “Beauty and the Beast,” “Swan Lake,” “Hansel and Gretel,” “Peter Pan,” “Sleeping Beauty,” “Aladdin,” “Alice in Wonderland” and others.

David Syrotiak said he loves performing shows like “Pinocchio” because he has the ability to switch roles in the middle of the show.

“It has the most puppets and different characters, which is intriguing to me,” he said.

For the Syrotiaks, the art of puppetry is about the feeling they receive from the love of performing.

“I love the ability to transport an audience out of themselves for an hour and just get them sucked into something they probably didn’t think they were going to get sucked into. That’s the best thing,” David Syrotiak said.

Mariana Syrotiak is a performer in the company as well and said she appreciates how the audience reacts to the puppets.

“I like the wonder that the show produces because people have a preconception of puppets — that they are either cute or creepy — but after our show I see the interest,” she said.

Steven Syrotiak said he loves putting on a great show.

“The most satisfying part about doing a show is nailing your character and getting the chemistry right between the co-performers,” Steven Syrotiak said.

The marionette theatre performs across the globe, including Europe, South America, Mexico, Israel and the United States.

The Syrotiaks chose to come to Youngstown after getting a call from Todd Dicken, a theater and dance lecturer and the director of a brand-new puppetry minor at YSU.

The show started with an introduction from YSU’s president, Jim Tressel. When the show ended, the audience gave a standing ovation, clapped and whistled.

After the show, the Syrotiaks gave a behind-the-scenes lesson for the audience and explained how the puppets move and how the stage is assembled.

The marionette theatre also brought out one of the puppets for the children to touch and take pictures with. 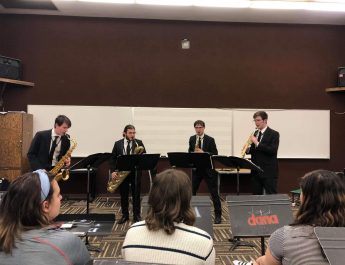 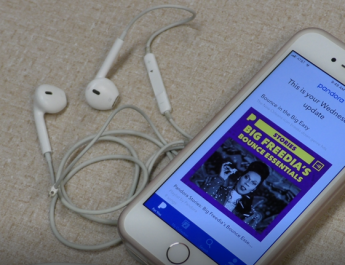