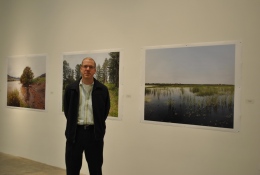 Stephen Chalmers, assistant professor of photography and recent addition to YSU’s art department, stands in front of three of his pieces on display at the McDonough Museum of Art. Photo by Chad Travers/The Jambar.

Stephen Chalmers, assistant professor of art at Youngstown State University, draws on his experiences from years spent working with emotionally disturbed children to create art that deals with loss and emotional hardship.

Chalmers, a photographer with a background in psychology, worked as a therapist for emotionally disturbed children in Portland, Ore., for three years before leaving to earn his Master of Fine Arts in cinema and photography from Southern Illinois University.

Now, his work is being shown at the McDonough Museum of Art as a part of its biennial faculty exhibition, which features works of art in various media by members of the art department at Youngstown State University.

The exhibition highlights works by the newest members of the art department. This year’s exhibition includes selected works by Chalmers, Charmaine Banach and Richard Helfrich.

The series of Chalmers’ photography on display at the McDonough documents sites where serial killers have disposed of bodies. The images were created over the summer, and the project was partially sponsored by a grant from the University Research Council.

“Even before I worked with emotionally disturbed children, most of my art dealt with psychologically charged issues,” Chalmers said.

Chalmers used Freedom of Information Act requests and searched police archives and newspapers to pinpoint various locations across the United States where killers have left their victims.

He then traveled to the sites to photograph them as they appear today, long after the bodies have been removed and the surroundings have returned to their natural state.

He began taking pictures of sites on the West Coast during the decade he lived in Washington before coming to Youngstown last year. Sites in Oregon, Washington and California were documented first.

The collection has since expanded to cover sites in other parts of the country. The work now includes images from Iowa, Atlanta and sites near Yellowstone National Park in Wyoming.

“A lot of my work plays with questions like, ‘Is photography really factual?’ or ‘Is there such thing as truth with a capital T?'” Chalmers said.

The work on display explores photography as factual documentation and its interpretation through the eye of the photographer and the viewer.

“If you think of a site where a body was disposed of, you immediately picture the whole CSI scene with the police tape and the squad cars, but these are just places. They existed before the gruesome things that happened, and they exist after. I’m kind of playing with the beauty of these sites, juxtaposed with the traumatic things that happened there,” Chalmers said.

Although the subject matter may seem gruesome, Chalmers said he has not met any resistance from law enforcement or victims’ families.

He does not go out of his way to contact the families because all the information he needs is available through FOIA requests and law enforcement reports, but sometimes the families reach out to him.

“One of the largest referrers to my website is actually the sister of one of the victims who was found in [Spokane, Washington]. She has become an advocate for victims of abuse and murder, and her website links to my image of where her sister was found. That drives an enormous amount of traffic to my website,” Chalmers said.

Chalmers created the high-resolution images by taking multiple overlapping photographs and using software to seamlessly stitch them together into one large image.

Even an image taken with an expensive professional camera can only be enlarged to a certain point before it becomes blurry and grainy. The composite image created from many slightly overlapping images allows for much higher resolution and level of detail in Chalmers’ work.

“There’s a picture in the gallery of a tree trunk taken somewhere in Washington. You can see a little bug crawling along the trunk in ridiculously high resolution,” Chalmers said.

The technique allows the artist to explore tiny details in a photograph that would not be possible with a single enlarged image.

Chalmers said he enjoys exhibits that provide the viewer with a perspective that is somehow changed as they move through the installation.

“I like when people walk into a venue and first say, ‘Oh, what’s up with all these pretty landscape photos?'” Chalmers said.

Viewers will notice that the name of each victim is printed underneath each picture as they move from piece to piece. When they finally make their way around to the artist’s statement and discover what the images represent, their perspectives are suddenly altered.

“There’s that shock of recognition when people find out what these images are all about,” Chalmers said.

Robyn Maas, exhibition designer at the McDonough, selected the photographs on display. She said Chalmers originally submitted seven, but space restrictions, more than artistic concerns, limited the number to five.

Chalmers has participated in group and solo exhibitions across the United States and as far away as China, South Africa and Australia. He has pieces on display in Thailand, and his work will soon be featured in an upcoming National Public Radio photography blog.