Downtown Youngstown residents will soon hear the clatter and clunks of construction as North Phelps Street closes and begins a six-month revitalization makeover.

The project will cost roughly $943,000, which will be utilized for rerouting telephone lines, replacing a sewer line,  and adding new gas and water lines, new sidewalks and street lights.

Initially, the project was scheduled to begin five years ago, but progress was halted a month in after workers found out that underground utilities were in the way of the sewer line.

In an article for the Vindicator, Charles Shasho, the Youngstown Deputy Director of Public Works said, “There was no way to reach the sewer, so it was decided to relocate the duct banks.”

Shasho said the vehicular traffic will be closed for the duration of the project, but pedestrian traffic will remain open on the east side of Phelps Street only to building entrances. 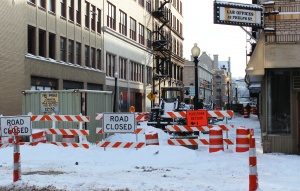 Some businesses that are affected by this closure will be Suzie’s Dogs & Drafts located directly on Phelps and V2 Wine Bar & Trattoria. Along with business owners, downtown residents are also among those affected.

Avery Mauger, a Youngstown State University student and Wick Tower resident, spoke about his frustration with the new construction project.

“The project will most definitely affect my walk to campus. I’ll have to cut through the food court below my building or go all the way around on Wick Avenue, but I think this project is needed.”

Mauger said Phelps Street is “one of the worst-looking streets downtown,” and the city always starts construction projects at the most inconvenient times.

He said the project should have begun in summer when most students aren’t in class and the weather isn’t so unpredictable.

Maddie Rhoads, a YSU student and Erie Terminal resident, said that it is “annoying” to get in and out of her parking lot and pedestrians are technically supposed to walk a block to get to Federal Street now.

“I just walk where it says you can’t, anyway,” Rhoads said

Despite her frustrations, Rhoads said that she feels indifferent about the project because Phelps Street is run-down and improvements are long overdue.

“Infrastructure improvements are great for the economy, so I’m not complaining,” Rhoads said.

Shasho also said in the article that the city is considering permanently closing down vehicular traffic on North Phelps Street located between Federal and Commerce so a public entertainment area can be added, almost similar to East 4th Street in Cleveland.